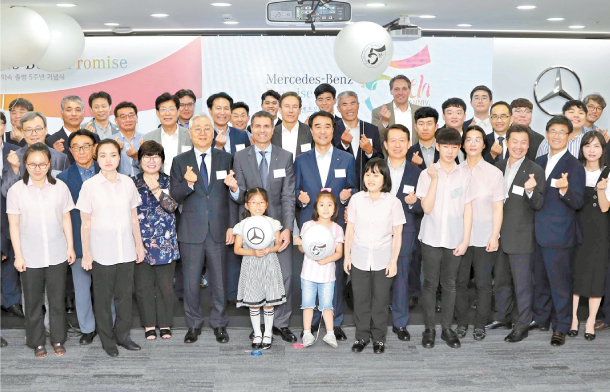 Mercedes-Benz Korea CEO Dimitris Psillakis hopes the automaker can lead the way in increasing diversity in the auto industry.

During a group interview with reporters on Thursday to celebrate the fifth anniversary of the automaker’s corporate social responsibility (CSR) committee, Psillakis admitted that there is still a long way to go.

He emphasized that he believes a major focus for the company now should be increasing diversity in the industry.

“We had a baby of one year and now it is at least an adolescent … [but] we still have things to do and improve,” the CEO said. “I would like to work in the direction of diversity. I would like to see more ladies joining our programs and break some taboos.”

Psillakis, soon entering his fifth term as head of the Korea unit of the German automaker, has led the CSR committee since 2015, just a year after it was established.

The committee has been engaging in a variety of CSR programs, raising some 18.1 billion won ($15.7 million) worth of funds over the last five years, but has not specifically focused on tackling diversity issues.

“I think our CSR committee is very open-minded … I’m very happy with the ideation process. We generate a lot of ideas internally, we receive a lot of ideas from our employees and associations,” he said. “What I would wish to have more is stronger and faster acceptance [from] society of some new ideas.”

Psillakis added that he would like to see people accepting that their car was worked on by a female technician, for instance.

The CEO did not explain what kind of program he plans to run to boost diversity.

The committee’s fund is managed and operated by social welfare organization Kids & Future Foundation. For an idea to be put into practice, the members need to discuss and choose it together.

Though Psillakis mentioned diversity as his next goal, the committee has already been working actively on various CSR projects in four main areas.

The committee’s industry-academia cooperation program “Mercedes-Benz Mobile Academy” is focused on training college students to become automobile experts. Over a hundred students among a total of 662 graduates of the program have even been given the opportunity to visit Mercedes-Benz headquarters in Germany.

Nearly 180 of those graduates have also found jobs in Benz Korea’s business network, including in dealerships.

Psillakis said the program has been very successful as it was able to offer career paths for college students and help them land jobs in the Benz network as well.

The third area is company-wide volunteer programs broadly categorized as “Mercedes-Benz All Together.”

Though not necessarily related to the auto industry, the program sees a vast majority of employees from Benz and its dealerships gather for joint volunteer projects.

One of the recent projects was making kimchi together to donate to people in need.

The so-called kimjang project, named after Korea’s kimchi-making process, was recorded in the Guinness Book of World Records as the largest number of people making kimchi together. In total 3,452 employees from the Benz business network gathered.

The company’s fourth and final CSR area is Mercedes-Benz GIVE, which combines sport events with opportunities to donate to a good cause.

For instance, the participation fee for those taking part in the “Give ‘N Race” marathon event is donated to social organizations, along with additional funds from the committee.

“Koreans are very sensitive and very emotional. They want to understand what the reasons are for things happening,” Psillakis said. “This means that for us, when we conduct CSR activities we have to be very diligent. We have a committee [so] it’s not a one-man decision.”