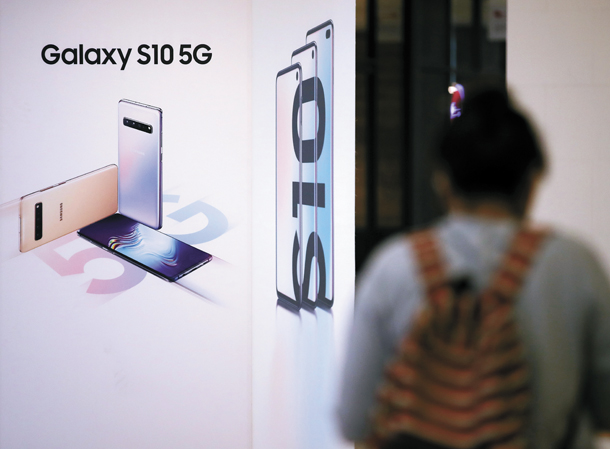 A pedestrian on Monday looks at the Samsung D’light in Seocho District, southern Seoul. 1 million Galaxy S10 5Gs have been sold already. [YONHAP]

China and the United States are battling over tech and trade, and Samsung Electronics seems to be winning.

Industry analysts say that as Shenzhen-based Huawei Technologies - which had been until recently the No. 1 network equipment company - is having a hard time due to U.S. sanctions, the expansion of Samsung Electronics in the market is becoming a reality. At the beginning of the year, Samsung Electronics announced its plan to invest 180 trillion won ($155.59 billion) in its 5G-network equipment business and artificial intelligence (AI).

The company had set a goal of 20 percent market share by 2020 in 5G-network equipment, a level it broke a year early and by 17 percentage points.

“Samsung Electronics took the top spot in the global 5G-network equipment market, with a 37-percent market share from the fourth quarter last year through first quarter this year,” Kim said.

Samsung Electronics was ranked seventh in the world’s 4G LTE and 5G-network equipment market, with a mere 5-percent market share last year, while Huawei had the largest market share, at 31 percent. Stockholm-based Ericsson and Nokia, based in Espoo, Finland, were No. 2 and No. 3 respectively.

At the event, one participant asked whether Huawei’s hardship due to U.S. sanctions is a chance for Samsung Electronics to expand its market share.

“We will focus on making our products the best in the world,” said Kim, careful not to celebrate the misfortune of a competitor.

Kim said that Samsung Electronics, which started 5G-network research in 2009, developed its 5G technology as it conducted 5G field tests in 2014 and 5G-mobility demonstrations in 2016.

He said that although Huawei has been leading the network equipment market until now, Samsung has stolen the lead position during the transition from LTE to 5G.

“The smartphone market will expand due to the appearance of new form factors, like foldable phones, and the development of 5G-based technology,” said Lee Jong-min, senior vice president at Samsung’s mobile communication business.

Lee conceded that the smartphone market has been stagnant for the last three years.

“Negative views exist, but we expect that the 5G phone and the foldable phone will be a new impetus in the smartphone market,” said Lee.

He estimated that 5G phones will be the mainstream in the future, as one million Galaxy S10 5Gs have been sold in Korea already, and the shipments of 5G smartphones in 2025 will total 853 million.

“Samsung Electronics has maintained its top position in the memory semiconductor field for decades based on skill in manufacturing semiconductors,” said Shin.

“By developing the Extreme Ultraviolet Lithography [EUV] process, we will maintain our position in the market.”

Samsung Electronics has started producing seven-nanometer semiconductors using the EUV process, the first in the world to do so.