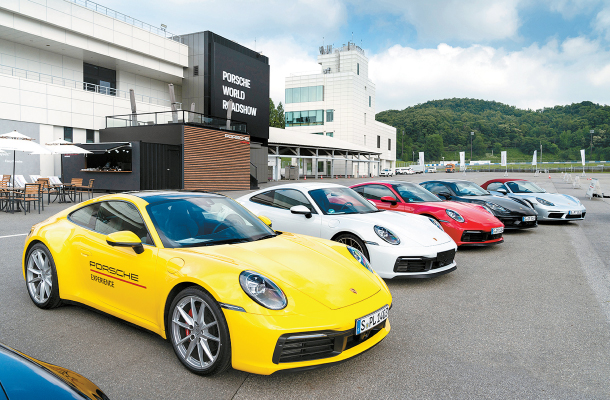 Porsche vehicles, some of which are not yet available in Korea, are lined up on June 19 for the Porsche World Roadshow 2019 at the AMG Speedway in Yongin, Gyeonggi. [PORSCHE KOREA]

YONGIN, Gyeonggi - Don’t be too envious. I just drove a Porsche.

The German carmaker flew in 22 of its best vehicles for a two-day test-drive session from June 19 for the Porsche World Roadshow 2019.

Well, maybe some envy is in order.

I didn’t just drive one Porsche. I drove a number of the cars, some of which are not yet available in the Korean market.

“This event is all about spreading a virus, a happy one, to you,” said Jukka Honkavuori, a Finnish instructor for the event.

Porsche World Roadshow, a biannual event managed by Porsche’s headquarters in Germany, is a driving-experience program that has attracted 47,000 people from 55 countries.

For Korea, Porsche World Roadshow 2019 was held at the AMG Speedway in Yongin, Gyeonggi.

This year’s event came three years after the last. Porsche held five different sessions - slalom, brake test, handling, e-hybrid performance and a taxi-driving session - allowing me to get behind the wheel of various Porsche models and put them through their paces. The list included the: 718 Boxster, 718 Cayman, Panamera, Cayenne, Macan and eighth-generation Porsche 911. 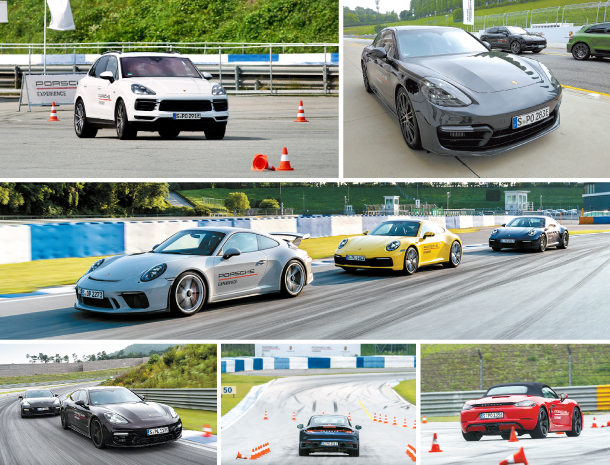 Clockwise from top left: The new Cayenne E-Hybrid on the slalom course during a media session at the Porsche World Roadshow 2019 held at the AMG Speedway in Yongin, Gyeonggi, on June 19. The Panamera 4 E-Hybrid next to the racetrack. Three two-door Porsche models are driven on a circuit. A 718 Boxster GTS is driven around plastic cones on a slalom course. Porsche’s eighth-generation 911 Carrera 4S speeds along a straightaway. Two Panamera models are driven on a circuit. [PORSCHE KOREA, KO JUN-TAE]

It’s safe to say I am still infected by the Porsche virus and do not hope for recovery anytime soon.

While Porsche instructors predictably said every one of the 22 vehicles is great, it was evident that the new Cayenne E-Hybrid was the model they most wanted to show off.

Porsche developed the futuristic, environment-friendly sport utility vehicle (SUV) in line with its e-mobility initiative. The vehicle has yet to be sold in Korea, and won’t be available until either late this year or early next year, ahead of the launching of the Taycan, the brand’s first fully electric model.

Although the automaker already unveiled the Cayenne E-Hybrid in March at the Seoul Motor Show, it was only displayed for visual appreciation and was not for driving. At the Porsche World Roadshow 2019, the full power of the machine was on display, the maker seeking to show that performance was not sacrificed in making the hybrid.

On a slalom course exclusively dedicated to the Cayenne E-Hybrid, I was able to test the electric version of Porsche’s “launch control” feature and feel how Porsche’s four-door hybrid model delivers much like the maker’s non-electric models.

Making turns, accelerating and slamming on the brakes was definitely Porsche-like.

With a V6 3.0-liter, 340-horsepower gasoline engine and 136-horsepower power electric motor, the Porsche SUV achieves a total of 462 horsepower and 71.4 kilogram-meters (516 pound-feet) of torque. The sizable hybrid SUV can reach maximum speeds of 245 kilometers per hour (152 miles per hour).

At no time while racing down the slalom course did the Cayenne E-Hybrid make a noticeable sound. The gasoline engine remained off the whole time while the vehicle swiftly navigated the cones.

The four-door sedan is rated at 462 horsepower, 330 from a 2.9 liter gasoline engine and 136 from an electric motor. The first hybrid model of the Panamera lineup can travel at up to 140 kilometer per hour solely with the electric motor and 278 kilometers per hour with all engines running.

The main drawback to these vehicles is the limitations of the e-side of the equation. They can go, but they can’t go the distance, so to speak, on futuristic technologies alone.

While the Panamera walks like a Porsche and quacks like a Porsche, it doesn’t really look like one. It’s decidedly reminiscent of a normal sedan, lacking the sharp lines that usually distinguish other Porsche vehicles. Fine for me, but others may quibble.

The session was organized so participants could take all Porsche models not yet in the Korean market around the track.

I took all of the models for two laps around a 4.346-kilometer circuit to briefly get a taste of vehicles that are essentially unknown to most Korean consumers.

The circuit at the AMG Speedway, with 16 corners, is a Korean course that meets international racing standards.

I now understand why Korean Porsche aficionados were dying for the Cayenne Turbo to hit the local market. It was almost unreal to feel an SUV more than 5 meters in length dominate the circuit with explosive speed and remarkable balance.

The top version of the third-generation Cayenne model, with a 4-liter 8-cylinder twin turbo engine, is rated at 550 horsepower and can hit 286 kilometers per hour. Despite being a large-sized SUV, it only takes 4.1 seconds for Cayenne Turbo to reach 100 kilometers per hour.

If equipped with additional Sports Chrono Package, it can do the same in 3.9 seconds.

During the session, I was also able to get behind the wheel of the Panamera Sports Turismo, also a model that has yet to land in Korea.

But don’t let the bigger size fool you: The Sports Turismo is rated at 550 horsepower and travels to speeds as high as 304 kilometers per hour.

The highlight for many was the lightweight 911 GT3, which boasts performance similar to professional racing cars produced by Porsche.

The 911 GT3 announced itself with a distinctive rumble as it entered the course.

While pushing 130 kilometers per hour in the run, I could understand why the model, yet to be sold in Korea, is sought by many Porsche consumers.

Porsche prepared its iconic eight-generation 911 Carrera 4S, which has not been officially released in Korea, for a test to show off its “launch control” feature, an electronic system that allows cars to instantly accelerate from a standing start.

After setting the driving mode to “Sports Plus,” with my left foot on the brake pedal, I slammed the accelerator pedal as hard as possible - imagining myself trying to crush an empty soda can.

As soon as the launch control activated, as verified via the digital screen, an instructor shouted to let go of the brake pedal.

It took less than four seconds, 3.6 seconds to be exact, for the Carrera to roar to 100 kilometers per hour, and I was pushed into the seat by the g- force.

The new 911 Carrera 4S is equipped with the new 8-speed PDK transmission, which adds 30 horsepower. If I had not pushed the brake pedal, the car would have eventually reached its maximum speed of 306 kilometers per hour.

“How many times do you think you can do this with Porsche? Anybody have a guess?” instructor Admi Shahrul Ahmad Saffian asked a group of reporters after the session.

While many offered conservative estimates from 50 to 500, the Malaysian instructor responded, “You can do this more than 1,000 times with this 911 Carrera without replacing the clutch, so if you are late for work, use launch control to arrive to your office on time.”

He added that Porsche is distinguished from other luxury auto brands in that no other sports cars can launch control as many times as Porsche vehicles.

After finishing the launch control session, I was led to a red 718 Boxster GTS waiting for me to zigzag around dozens of plastic cones for a slalom course.

Only a few seconds into testing, it was easy see that the traditional two-seater sports car is designed to swiftly cruise through the cones.

Turning the steering wheel to left and right on the curvy route, which took me around 27 seconds to finish, gave me the impression that Porsche heavily focused on upgrading the weight balance for the top 718 model.

Later I found out that one of the participating reporters finished the course in around 19 seconds.

At no time I was ever worried about the GTS tipping over as we drove the course.

The morning I tried the slalom course was perfect for testing the PASM, as the course was slightly wet from rain overnight.

Although some may worry that focusing on suspension and weight could have hindered the model from being a sports car worthy of the brand, there’s no need to worry.

The model, which comes with a 2.5-liter, four-cylinder engine, can generate up to 365 horsepower and 43.8 kilogram-meters of torque.

Its top speed is 290 kilometers per hour.