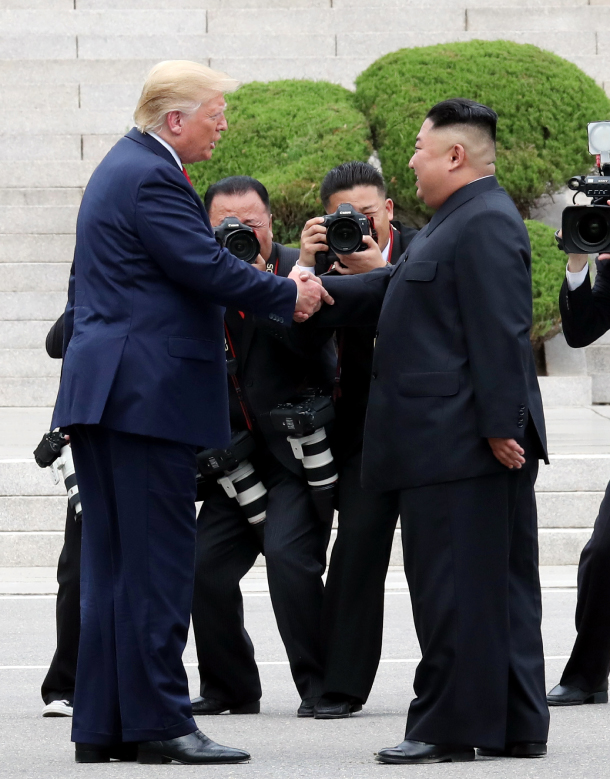 “We’ve agreed that we’re each going to designate a team. The teams will try to work out some details,” Trump said after talks with Kim behind closed doors in the truce village of Panmunjom. Trump and Kim sat down for nearly an hour, their first face-to-face meeting since a second summit in Hanoi, Vietnam, in February ended prematurely and without a deal.

U.S. negotiators will be led by Special Representative for North Korea Stephen Biegun, according to Trump. He said the United States and North would start working over the next two to three weeks for a comprehensive deal - but that he does not want a rushed agreement. “We’re not looking for speed,” he said. “We’re looking to get it right.”

Trump repeatedly stressed that tensions were rapidly reduced since he took office, and that the North is not conducting nuclear or long-range ballistic missile tests. 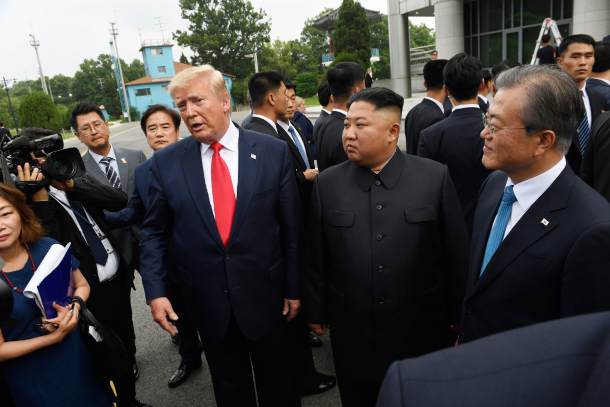 “We are in a very good path,” Trump said. Asked if the United States will lift sanctions on the North, Trump said they will remain for now, but he looks forward to taking them off when progress is made.

Before sitting down for the 50-minute private talks, Trump and Kim met each other at the military demarcation line, the de facto land border between the two Koreas that bisects the Joint Security Area of the Demilitarized Zone (DMZ). After a handshake, Trump crossed the line to join Kim on the northern side, becoming the first U.S. president to step on North Korean soil while in office.

Trump and Kim stood together on the northern side of Panmunjom, shook hands again, and posed for photos. They crossed the border to the south. President Moon Jae-in, who accompanied Trump to the DMZ, joined them and exchanged greetings.

The three leaders went inside Freedom House on the southern side of the Joint Security Area, and Kim and Trump sat down for bilateral talks. The national flags of North Korea and the United States were arranged behind their chairs, signaling that it would be more than a brief exchange of pleasantries. 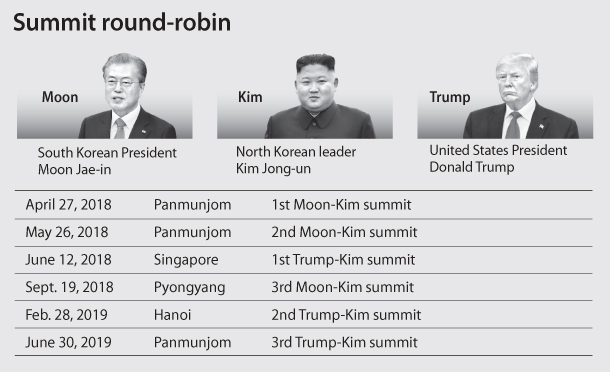 “You are the first U.S. president in history to set foot on our soil,” Kim told Trump before the meeting. “It is an extraordinary decision to settle the unfortunate past and pioneer a great future.”

Both Kim and Trump stressed that the meeting in Panmunjom was a spontaneous decision based on their close personal relationship. The meeting between Trump and Kim was arranged in less than two days. Trump sent a tweet on Saturday proposing a meeting at the border, and North Korea responded positively.

Kim said before the talks that he did not know until Sunday that he would meet the U.S. leader at the border. “Having a handshake between two countries that have been hostile enemies for a long time in this place, a symbol of separation of the North and the South and a reminder of the bitter past, shows that today is different from yesterday,” Kim said. “I thought that this meeting can show all the people that we can do better. I also thought this meeting can have a positive influence on our future course of action.”

The DMZ is a 250-kilometer (160-mile) long, 4-kilometer-wide border that has separated the two Koreas since the Korean War truce in 1953. Despite its name, it is one of the world’s most heavily armed strips of land.

Panmunjom, or the Joint Security Area inside the DMZ, is an enclave bisected by the military demarcation line between the two Koreas. It was the venue of Moon’s first summit with Kim in April 2018, when the two leaders clasped hands and crossed the border together in a symbolic gesture of peace.

Earlier in the morning, Trump said he would have a short, handshake meeting with Kim for “two minutes,” but they ended up talking for 50 minutes. After the Kim-Trump talks ended, Trump and Moon together escorted Kim to the border. They stood briefly on the southern side of the military demarcation line and bid farewell. Trump and Kim shook hands, and Moon hugged Kim, before the North Korean ruler crossed the border to return home.

Trump and Moon, then, addressed the press. After announcing that he and Kim agreed that their governments will form teams to resume denuclearization dialogue, Trump said he “thinks” North Korean negotiators in the previous talks are still alive, denying an earlier Korean media report that they were purged - or executed - after the Hanoi summit.

“I think they are. I can tell you the main person is,” Trump said, without identifying the name. “I would hope the rest are too.”

Trump also said he had extended an invitation to Kim to visit the White House. “Anytime he wants to do it. I think we want to take this down to the next step, let’s see what happens,” Trump said.

Moon also expressed satisfaction about the Kim-Trump meeting. “I believe we have surmounted a hill,” Moon said, adding that latest development gave hope to the 80 million people on the Korean Peninsula.

Earlier in the day, Moon and Trump spent 98 minutes together for a summit and working luncheon at the Blue House. The North Korea issue and the Korea-U.S. alliance as well as bilateral trade were discussed.

After the discussions, they held a joint press conference and announced the plan to visit the DMZ.

“For the first time in history, leaders of the United States and North Korea will face each other in Panmunjom, the symbol of national division, and shake hands for peace,” Moon said. “We will witness today that communication and dialogue will lead us to the best situation.”

Moon stressed that the focus of the DMZ meeting on Sunday was dialogue between the North and the United States. “I was invited to Panmunjom today, but the inter-Korean dialogue will be pursued next time,” he said.

Trump arrived in Korea Saturday evening after attending a Group of 20 Summit in Japan, and had dinner with Moon at the Blue House. On Sunday, he met with Korean business leaders in the morning. Following the DMZ meeting, Trump delivered a speech to U.S. soldiers at the Osan Air Base. He left for the United States later in the evening.