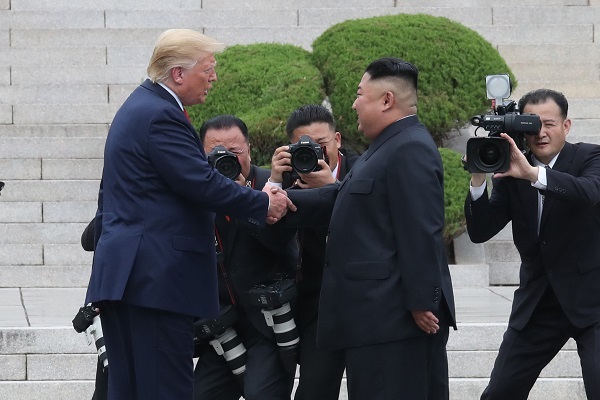 U.S. President Donald Trump, left, shakes hands with North Korean leader Kim Jong-un in the North Korean side of Panmunjom, the truce village in the demilitarized zone, on Sunday. [YONHAP]

Trump, along with South Korean President Moon Jae-in, arrived in Panmunjom, a truce village inside the Demilitarized Zone, in the afternoon. Following a brief tour of the southern side of the Joint Security Area, Trump walked out to meet Kim at the military demarcation line between the two Koreas.

As Trump approached the border, Kim walked from the North Korean side. After they exchanged greetings, Trump crossed the military demarcation line to join Kim on the northern side.

It was the two men’s first face-to-face meeting since their second summit in Hanoi, Vietnam, in February, which ended prematurely and without a deal.

Trump and Kim, then, crossed the border to the south. President Moon joined them and exchanged greetings.
The three leaders went inside Freedom House on the southern side of the Joint Security Area and Kim and Trump sat down for bilateral talks. The national flags of North Korea and the United State were arranged behind their chairs.

Earlier in the morning, Trump said he would meet Kim in Panmunjom, but their meeting would be a brief handshake.

Both Kim and Trump stressed throughout the event that the meeting in Panmunjom was a spontaneous decision based on their close personal relations. Trump sent a tweet on Saturday proposing a meeting at the border, and North Korea quickly responded positively.