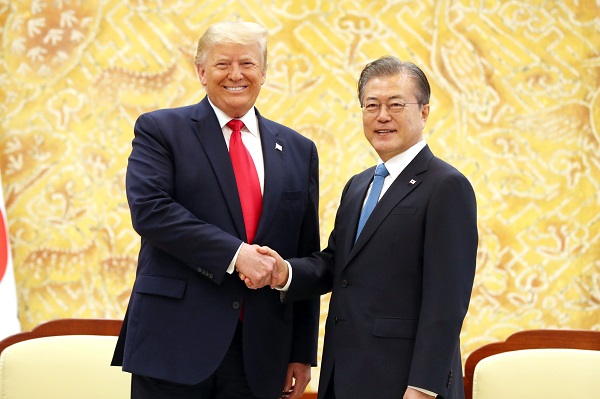 U.S. President Donald Trump said Sunday he plans to meet with North Korean leader Kim Jong-un in the Demilitarized Zone (DMZ) later in the day and related preparations are under way.

If held, he said, it would be a "very quick" meeting. The venue is expected to be the Joint Security Area (JSA), also known as the truce village of Panmunjom, where President Moon Jae-in held talks with Kim last year.

"I have been told that Kim Jong-un would like to meet, and that it looks like they are in final stages of working out just a very quick meeting," Trump said at the outset of talks with President Moon Jae-in over lunch at the Blue House in the wake of a summit joined by a smaller group of aides.

"I know that it's very difficult in terms of logistics, security, very complicated," he said in front of press, opening Sunday's summit with Moon.

"I think I can say with great confidence that the relationship with South Korea has never been stronger or better," Trump said. "Good chemistry between the leaders."

While on a visit to Japan for a Group of 20 session, Trump invited Kim to a "handshake" meeting at the DMZ via Twitter.

Moon agreed that such a DMZ session, if realized, would be a "very historic" event.

Moon said he would accompany Trump on his DMZ visit but suggested that he won't meet with Kim himself.

"The focus of today's dialogue (at the DMZ) will be that between the United States and North Korea," Moon said. "I hope that (you) will make big progress in dialogue with Chairman Kim Jong-un and bear a good fruit."

Meanwhile, Koryo Tours, a Beijing-based tour agency specializing in North Korea tour programs, said on its Twitter account that, "The DMZ is closed to tourists visiting from the North Korean side today."

Trump arrived at the Blue House after attending an event with the heads of South Korean conglomerates at a Seoul hotel.

Earlier in the day, Trjmp tweeted, "Today I will visit with, and speak to, our Troops - and also go to the DMZ (long planned)."

On a Blue House welcome dinner hosted by Moon the previous night, Trump said on Twitter that he "toasted" a "new Trade Deal." He was apparently referring to the revision of a bilateral free trade agreement.

During his previous visit to South Korea in November 2017, Trump pushed for a DMZ trip with Moon by chopper. But it was canceled due to bad weather.