Ryu Hyun-jin of the Los Angeles Dodgers has been chosen as the starter for the National League (NL) All-Star squad for the 2019 All-Star Game. 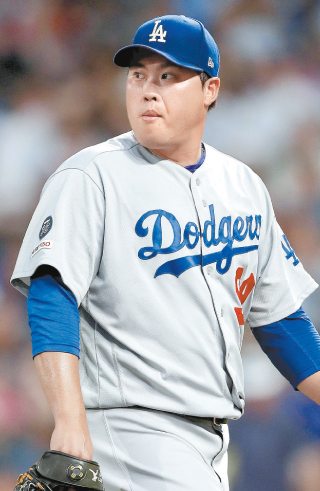 Ryu Hyun-jin of the Los Angeles Dodgers leaves the mound during a game against the Colorado Rockies at Coors Field on Friday. [GETTY IMAGES/YONHAP]

Dave Roberts, Ryu’s manager with the Dodgers and the NL skipper for the All-Star Game, told reporters on Sunday, “I expect Hyun-jin to start the game.”

Shortly after Roberts’ comment, the Dodgers officially announced that Ryu will be the starter for the NL team.

Managers get to select their starting pitchers out of the 12 pitchers picked for each All-Star squad.

The All-Star Game will be played on July 9 at Progressive Field in Cleveland.

Ryu’s next scheduled start will be Thursday against the San Diego Padres at home, but since his All-Star Game start is confirmed, Ryu will be pitching on four days’ rest.

Ryu is the fourth Korean to earn an All-Star selection, after Park Chan-ho of the Los Angeles Dodgers in 2001, Kim Byung-hyun of the Arizona Diamondbacks in 2002 and Choo Shin-soo of the Texas Rangers in 2018. Ryu would be the first Korean pitcher to start an All-Star Game with the announcement.

“It’s an incredible honor and privilege to get the opportunity to start the All-Star Game,” Ryu told the Orange County Register newspaper through an interpreter.

After the starting position players for each league were voted on by fans, the remaining spots were filled by player voting (16 spots for the NL) and by the MLB Commissioner’s Office (eight spots).

Ryu was a no-brainer All-Star choice as he’s put together a Cy Young-worthy campaign. He leads all major league pitchers with a 1.83 ERA - this despite his worst out of the season against the Colorado Rockies on Friday, when he was shelled for seven earned runs in four innings - and Ryu also has the lowest walks and hits per inning (WHIP) in the NL with 0.90.

With 94 strikeouts against only seven walks all season, Ryu has a strikeout-to-walk ratio of 13.43, tops in the majors by a wide margin.

The next best on the list is Ryu’s Dodgers teammate Walker Buehler at 7.43.

Ryu is tied for the NL lead with nine wins. He’s been stuck at that number over his past four starts.

Neither Park nor Kim got to start in their All-Star appearances, and Choo was a reserve outfielder in last year’s game.

Park relieved NL starter Randy Johnson in the third inning in 2001 but ended up as the losing pitcher after giving up a solo homer to Cal Ripken Jr. in the future Hall of Famer’s last All-Star Game. Park only pitched that one inning, as the American League (AL) went on to win 4-1.

The following year, Kim was charged with two earned runs on three hits in just one-third of an inning in relief in the AL’s four-run seventh. The two sides ended up in a 7-7 tie.

In 2018, Choo, the first Korean position player to make an All-Star team, came off the bench in the top eighth and singled off Josh Hader. He later scored on a three-run home run by Jean Segura.

Choo grounded out to shortstop in the ninth inning and ended his first All-Star Game with a hit and a run scored in two plate appearances.