Exports in June tumble the most in three years

Exports in June tumble the most in three years 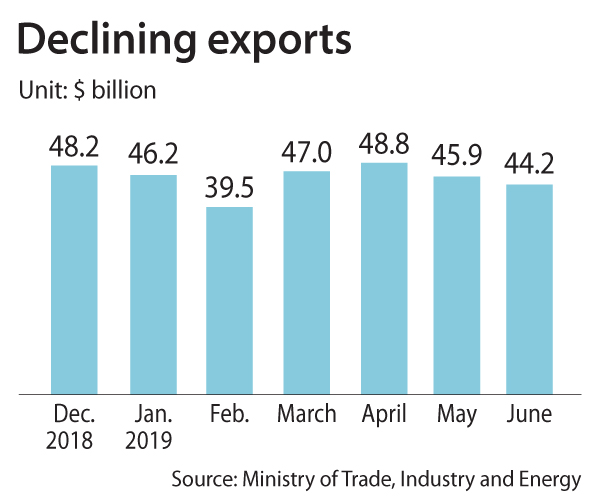 The Ministry of Trade, Industry and Energy said Monday the country’s exports in June were $44.2 billion, a 13.5-percent decline from a year earlier and the largest drop since January 2016, when exports fell 19.6 percent.

It was the seventh consecutive month of on-year declines for Korean exports.

Outbound shipments from Korea in the first half of this year fell 8.5 percent compared to the same period a year earlier.

The government cited weakness in the semiconductor industry and the U.S.-China trade dispute for the drop in June.

The Trade Ministry explained that DRAM prices fell over 60 percent on year in June and that global companies have reduced chip orders for data centers.

Exports fell across the board and only shipbuilding and autos rose among the 13 major export categories.

The ministry said that petrochemical exports fell 24.5 percent largely due to a fall in oil prices and operational delays at some facilities.

The shipbuilding sector, which suffered last year due to an industry downturn, recorded a rise of 46.4 percent last month on year as orders received in 2017 started to be delivered from March.

Exports to China declined due to the country’s problems with the Donald Trump administration’s trade conflict.

Outbound shipments to China, Korea’s largest export market, fell 24.1 percent last month from the previous year. This was the largest drop since May 2009, when exports dropped 25.6 percent.

Exports to the United States also fell 2.5 percent last month due to reduced demand for semiconductors and falling prices for petrochemical products.

The Trade Ministry promised 119 trillion won ($102.7 billion) in financial support for exports in the second half of the year.