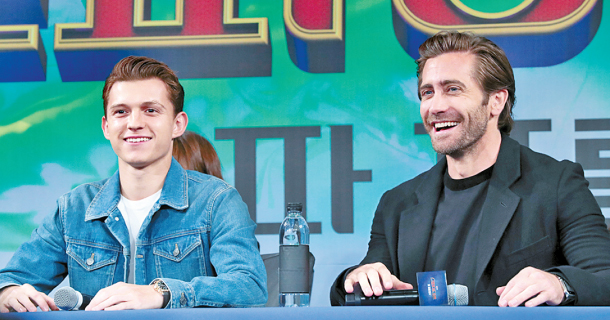 The leads from “Spider-Man: Far From Home,” Tom Holland and Jake Gyllenhaal, attend a press conference to promote their film at the Four Seasons Hotel in central Seoul.[NEWS1]

When the trailer for “Spider-Man: Far From Home” came out, Marvel fans were just coming to terms with “Avengers: Endgame,” the previous film set in the Marvel Cinematic Universe (MCU).

At the beginning of the trailer, actor Tom Holland personally came on screen to warn Marvel fans of a major spoiler in the clip for anyone who hadn’t yet seen “Endgame.” Marvel Studio President Kevin Feige himself later confirmed that “Spider-Man: Far From Home” - not “Endgame” - would be the wrap-up of “Phase 3” of the MCU.

“In this film, what drives Peter Parker through the story is that he’s trying to find out where he belongs in the world and whether he’s a teenager on a school trip or a superhero saving the world, and he has to make that decision,” said Holland at a press conference with co-star Jake Gyllenhaal in central Seoul on Monday. It was Holland’s third visit to Korea.

In “Spider-Man: Far From Home,” Parker is struggling to cope with the death of mentor Tony Stark, but he’s also trying to move on with his personal life.

Yet the young protagonist quickly realizes that he needs to step up and occupy the void left behind by Iron Man. Although at first he tries to escape this fate, fans will be able to see how the friendly neighborhood Spider-Man transforms into the friendly world-saving Spider-Man.

When asked how he personally felt about filling the empty Avengers seat left by Iron Man star Robert Downey Jr., Holland replied that he couldn’t possibly replace Downey, as he was “the most iconic cinematic character of all time.” But the actor added that he wasn’t totally alone on the journey, as he was able to call up Downey for advice.

For Gyllenhaal, it was his second time in the country. He last came to shoot scenes for the film “Okja” with director Bong Joon-ho. In “Spider-Man: Far From Home,” the actor debuts as Quentin Beck - also known as Mysterio - a trickster whose superpower is to create illusions.

“When the studio approached me with the idea of this role, I loved a number of things about Mysterio,” he said. “I think in the comics he’s an antagonist and the villain, [but in the film] he forms a relationship with Peter, becoming comrades and friends, and that was very intriguing.” 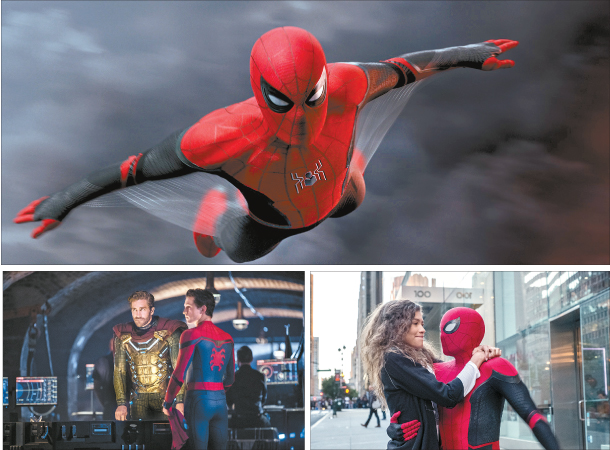 Scenes from “Spider-Man: Far From Home.” At the top, Peter Parker, played by Tom Holland, in his new black and red suit. Above left, Mysterio, played by Jake Gyllenhaal, and Parker. Above right, Parker with his love interest and classmate MJ, played by Zendaya Coleman. [SONY PICTURES]

The actor also thought the timing of the role was good for him personally. “[For this role] in particular I was in a place of my life where I really wanted to exercise my imagination, enjoy and have fun,” Gyllenhaal said.

Both actors were amazed by the degree of passion local Marvel fans displayed at a fan meet held on Sunday. “It was electric,” Holland said. Gyllenhaal said he truly appreciated the enthusiasm the fans showed for the new movie.

When asked what the film offers the global audience, Holland replied that his character speaks to young people around the world because he’s relatable.

“Everyone can relate to being a young teenager,” Holland said. “[Spider-Man is] lovable because he represents everyone in a way - falling in love for the first time, having friends, going on vacation […] and that’s why people can connect to this version of Peter Parker so much because they see a little bit of themselves in him and I think that’s what Jon Watts [the director] has done so well [in this film].”

Gyllenhaal showed affection for his character too.

“I think Mysterio’s best superpower is intelligence,” he said. “Although he has his superpowers, his ability to strategize and see a number of steps ahead of everyone [was what impressed me] and that’s what I love about Mysterio.”

Although the duo hinted at the possibility of reappearances in MCU’s phase 4, they were hesitant to commit. But they agreed that what’s to come in “Spider-Man: Far From Home” will not disappoint fans.

“You may think you know what you’re in for, but get ready,” Gyllenhaal warned local fans planning to watch the film.

“Spider-Man: Far From Home” was released in local theaters from Monday midnight.