Rush is on for best credit cards as they vanish

Rush is on for best credit cards as they vanish

Credit cards with premium benefits are vanishing, one by one.

“The card that I have been using is finally headed towards being discontinued,” read a post on a Naver’s internet community on June 11. “I’ve enjoyed using the card as it was not only a debit card but also provided unlimited discounts when filling up on gasoline. I guess I should make the most of the remaining time that.” 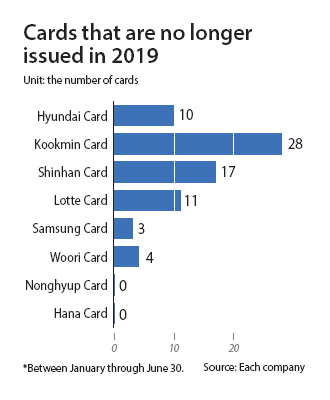 Similar posts can be found online as cards that have been offering a diverse range of privileges are now coming to an end as the financial regulator earlier this year started pressuring credit card companies to cut back on their marketing expenses to lower commissions charged to businesses.

Some of the posts advise others to subscribe to credit or debit cards providing such benefits before they are no longer available.

Under the current law, credit card issuers when making changes to the rewards previously provided, such as discounts at restaurants or at gas stations, free coffee each month or even flyer points, they have to notify their customers beforehand. The changes have to be published on the company’s websites.

However, it doesn’t have to take these measures when canceling the credit card altogether.

According to the financial industry, so far this year 73 credit and debit cards from six card issuers are no longer accepting new clients.

The card companies say they are scrapping products that have overlapping privileges or are discontinuing them as the contract with companies that provided such services has come to an end.

The customers are the ones that are feeling the pinch of the shrinking benefits, especially as many of the vanishing cards are those that were most generous.

One is the Samsung Card 7.

This credit card allowed customers to transfer points to flight miles. The credit card subscribers could then upgrade their flights.

But Samsung 7 is no longer issued.

Some of the customers are employing devious and complicated means to extend their card benefits.

In hopes of continuing the air mileage accumulation possible with Samsung points, some of the consumers suggest getting the KB Golden Life debit card before it is discontinued on July 5.

The points accumulated from using the KB Golden Life debit card can be converted to air points.

While the KB Golden Life card no longer accepts newcomers, existing members can get the expiration date extended when reissuing the card if it is damaged or lost.

Industry insiders say under the current circumstances, it will be much more difficult to find credit cards or debit cards that provide benefits than in the past.

“These are cards that were issued based on analyzing profitability five years ago,” said a card company official.

“But under the circumstances of shrinking profits due to lowered commissions, we have to rearrange the portfolio where benefits are reduced.”

The official said with credit card commissions falling and the Financial Supervisory Service strengthening its supervision over new products, it will be difficult to introduce new credit cards with abundant benefits.