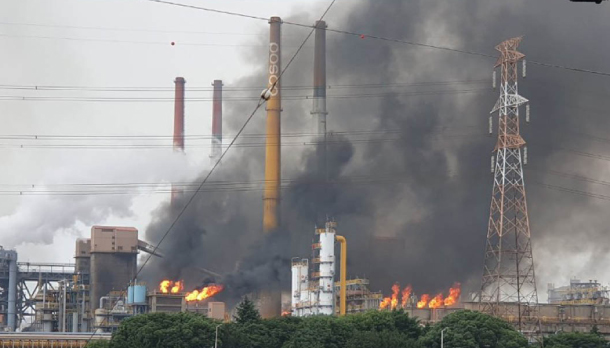 Black smoke consumes Posco’s steel mill in Gwangyang, South Jeolla, on Monday after the plant suffered a blackout. The smoke was produced as toxic gases were burned off to present dangerous amounts building up in the coke plant. [YONHAP]

All five blast furnaces at Posco’s steel mill in Gwangyang, South Jeolla, were taken offline by a blackout on Monday morning.

Damages from halting the furnaces are estimated to amount to a minimum 40 billion won ($34 million), but the figure could rise much higher.

The blackout could add an additional burden to Posco, which is already struggling after allegations that its plants are emitting unnecessary levels of pollutants through safety valves and the ongoing refusal by the truck drivers’ union to deliver its goods unless it raises its commission rate.

According to Posco on Monday, the steel mill in Gwangyang suffered a blackout at 9:11 a.m. After the blackout, a large amount of black smoke was seen rising from the coke plant.

The power outage was likely caused during a repair to a power substation.

“The [black] smoke came from burning off the remaining gas during the emergency,” said a Posco official. “There was no fire or explosion and no injuries.”

The coke plant is where the raw materials that are injected into blast furnace are processed.

The coke undergoes a process similar to steaming to make it into a single mass. In the process, toxic gas is emitted.

When the electricity supply is cut off during the process, the toxic gas can build up to dangerous levels.

If toxic gas builds up in the system, it can lead to fire or explosion. The gas has to be burnt off safely to reduce the pressure.

According to Posco, the black smoke was the result of combusted gas being released from all 48 safety valves as an emergency precaution.

Posco said it was able to get the power back up 33 minutes after the blackout.

But the steel manufacturer faces a bigger problem. Due to the blackout at the coke plant, the mill’s centrifugal fans were also stopped.

The fans are a key component as they supply hot air to the furnace.

Currently, only one of the five furnaces is operating normally.

The Gwangyang steel mill produces 56,000 tons of molten steel every day. Considering that the hot sheet products cost 720,000 won to 740,000 won per ton, halting the furnace could result in at least 40 billion won of losses.

Posco has been trying to downplay the fact that the furnaces were incapacitated.

“It is true that furnaces are currently suspended,” said a Posco official. “It will take about a day to restart them.”

Yet the official said it will try to meet the overall production goal by readjusting working hours to recover the loss of production resulting from the blackout.

But industry insiders say the most important factor is when the blast furnaces will become operational.

“The damage could be even worse as all four coke plants, as well as the centrifugal fans, have been suspended,” said an industry insider, who requested anonymity.

Some predict that Posco has at least three to four days to restart its blast furnace. If the furnaces are suspended for any longer, losses will increase dramatically as the metal starts to harden.

Posco will also be held accountable for exposing the local community to the black smoke.

Recently, the South Jeolla provincial government ordered the steel mill to suspend operation for 10 days on suspicions it was emitting higher-than-acceptable levels of toxic substances through its safety valves.

“Our field agents in their investigation found that today’s opening of the safety valves was the results of the blackout at the coke plant,” said a South Jeolla government official. “[However] on the pollutants that were emitted, we plan to receive a self-improvement plan from Posco.”

Currently, Posco is also facing another obstacle. The union truck drivers delivering steel products from Posco’s steel mill in Pohang, North Gyeongsang, have been on strike for three days demanding the steel company raise their commission. The 12 transportation companies are negotiating with the unionized drivers on behalf of the steel maker, but drivers are demanding that Posco itself come to the negotiation table.