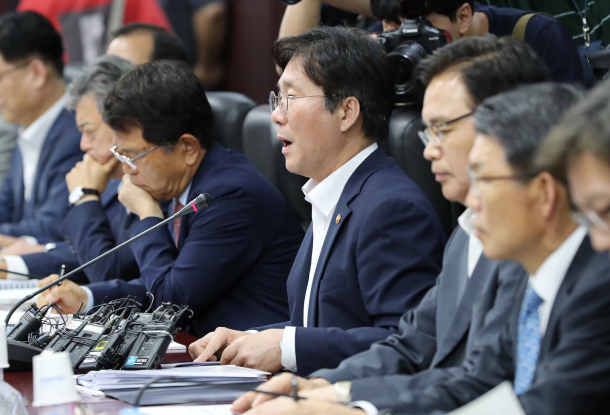 The Korean government said Monday it will file a complaint with the World Trade Organization (WTO) over Japan’s decision to tighten restrictions on the export to Korea of key materials used in semiconductors and smartphones, retaliation against Korean Supreme Court rulings on the wartime forced labor issue.

Japan’s Ministry of Economy, Trade and Industry announced Monday it will restrict exports of three types of chemicals and components needed in smartphones, television displays and semiconductors. This includes fluorinated polyimide, needed for displays, which Japan holds a monopoly on global production of. It will also restrict exports of photoresists and hydrogen fluoride, used in semiconductors.

The Japanese Trade Ministry didn’t specify the measures were a response to the wartime forced labor issue, but said that there has been an “occurrence of an inappropriate matter.”

Starting Thursday, Japan will remove Korea from a so-called “white list” of 27 countries, such as the United States and Britain, which have minimum restrictions on trade. Japanese manufacturers will now have to seek individual permits from the government each time they want to export the three high-tech materials to Korea, and the cumbersome case-by-case procedure could slow down supplies to Korean tech companies like Samsung Electronics or SK Hynix.

The Japanese government is also reviewing tightening regulations on export of communications devices and other advanced material components.

“Our government has made effort toward maintaining a mutually beneficial cooperative relationship with Japan in the economic sector,” Sung Yun-mo, Korea’s minister of trade, industry and energy, said after a strategy meeting Monday. “But the Japanese government’s announcement today on export restrictions is an economic retaliation measure because of our Supreme Court’s decisions.”

He expressed “deep regret” that Japan’s measures “go against common sense” democratic principles and the separation of powers between the executive, legislative and judicial branches of governments.

Japan’s announcement came just two days after President Moon Jae-in visited Osaka, Japan, for the Group of 20 (G-20) summit. While Moon had been hoping to hold a bilateral meeting with Japanese Prime Minister Shinzo Abe on the sidelines of the G-20, the two leaders merely shook hands for eight seconds during a photo shoot on Friday.

The economic retaliation against Korea comes despite Abe emphasizing the need for a free and fair trade system during the G-20 summit, where world leaders gathered in Osaka Friday and Saturday.

Sung noted that Japan’s restrictions are banned under WTO regulations and go against the G-20 leaders’ declaration on Friday, which stated, “We strive to realize a free, fair, non-discriminatory, transparent, predictable and stable trade and investment environment, and to keep our markets open.”

Korea, Sung added, “will work to diversity our import sources in response to Japan’s unilateral measures,” as well expand its domestic production facilities and work to support Korean companies in order to minimize damage to them from the restrictions.

Tokyo has been strongly objecting to the Korean court decisions last October and November, which recognized the illegality of Japanese colonial rule over the peninsula, especially as victims have started local court procedures to seize the assets of the Japanese companies in Korea.

The Japanese companies - Nippon Steel & Sumitomo Metal and Mitsubishi Heavy Industries - have refused to comply with the Korean Supreme Court rulings as Tokyo maintains that a 1965 bilateral treaty normalizing bilateral ties between the countries, which provided the Korean government with an economic cooperation fund, settled all compensation matters.

Korea maintains that it does not intervene in judiciary decisions, but also has emphasized that the victims are elderly and that it is essential to restore their dignity.

After long deliberation, Seoul last month proposed creating a joint fund comprised of voluntary contributions by Korean and Japanese companies to compensate the forced labor victims and help resolve the issue, but Tokyo promptly rejected the offer and has been calling for an arbitration panel involving a third party.

Korean Minister of Foreign Affairs Kang Kyung-wha and her Japanese counterpart, Taro Kono, held an unannounced meeting Friday evening on the sidelines of the G-20 forum.

During the meeting, Kang explained to Kono the Korean government’s position on the Korean court decisions on the wartime forced labor issue, according to the Korean Foreign Ministry. They also agreed to “continue efforts toward the stable management and development of the two countries’ relations through close dialogue through diplomatic authorities,” including themselves.