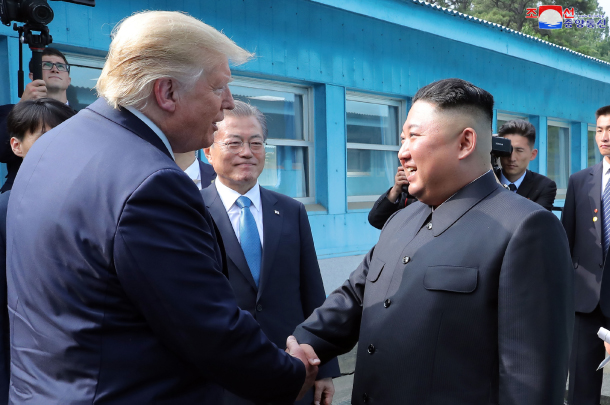 South Korea’s opposition lawmakers criticized President Moon Jae-in for getting sidelined by the leaders of North Korea and the United States on Sunday in Panmunjom, saying Seoul was being excluded from denuclearization talks.

North Korean leader Kim Jong-un and U.S. President Donald Trump met for about an hour from 4 p.m. on Sunday inside Freedom House, a building on the southern side of Panmunjom, after Kim crossed the border to meet the U.S. president. According to the Blue House, Moon did not take part in that meeting.

Trump arrived in South Korea on Saturday afternoon for a two-day visit and traveled to Panmunjom on Sunday afternoon to meet Kim.

Before their summit, Trump and Kim met at the military demarcation line bisecting the two Koreas in Panmunjom.

Trump briefly crossed the line into North Korea, then crossed back to South Korea with Kim. As the two leaders walked towards Freedom House, Moon greeted them.

The South Korean president, however, did not appear with Kim and Trump as they were filmed arriving at a room inside Freedom House to begin their third summit.

The Blue House said Moon was in Freedom House during the summit, but in a different room “waiting” for the talks to end.

Hwang Kyo-ahn, chairman of the main opposition Liberty Korea Party (LKP), said Monday it was a “shame” that Moon didn’t participate in the summit between Kim and Trump. He said that Seoul could face “a serious threat” as it tries to play a role between Pyongyang, which insists on bypassing Seoul to communicate directly with Washington, and Washington, under Trump’s “America First” policy.

Rep. Na Kyung-won, floor leader of the LKP, said Moon has gone from saying he’d seize the “steering wheel” of the North Korea nuclear issue - which suggested he would play an active role in resolving the nuclear problem - to being the arbiter between Pyongyang and Washington, and now to merely being a “guest.”

Na said she feared Moon was putting himself in a position where both Pyongyang and Washington could bypass him, simply waiting for denuclearization to happen through talks between Washington and Pyongyang.

“Nothing has really changed” after the third North-U.S. summit, Na said. “Nuclear weapons, ballistic missiles, North Korea sanctions are all the same as two years back.”

Sohn Hak-kyu, chairman of the Bareunmirae Party, joined the criticism, saying that the South Korean president played no role in a summit that was held on South Korean soil.

“The time the leaders of South Korea, North Korea and the United States spent together was only three minutes,” said Sohn.

“And as the North-U.S. summit was being held for 53 minutes, President Moon had to wait in a different room.”

A high-level Blue House official refuted this, telling the JoongAng Ilbo on Monday that Moon thought Trump and Kim needed a one-on-one meeting to resume denuclearization talks. The official did not explain whether Moon was actually invited to participate in the summit.

Another Blue House source told the paper that its office initially suggested to the United States that Moon meet Kim at the inter-Korean border and escort him to the South, where Trump will be waiting. The United States refused this scenario.

“I think we failed to calculate that Trump needed the title of the first sitting U.S. president to step on North Korean soil,” said the source.

Upon hearing this, Moon was said to have stated that it was more important that Kim meets Trump, adding it wasn’t important what role he played.