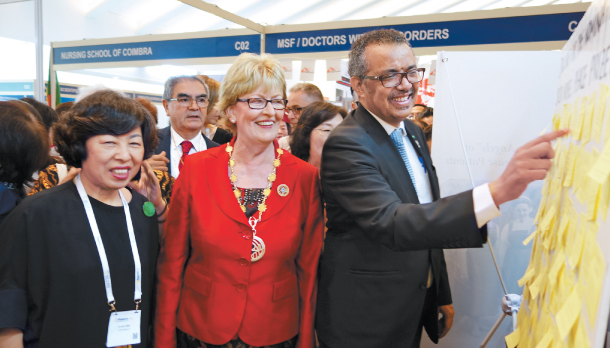 The secretary general of the World Health Organization, Tedros Adhanom Ghebreyesus, looks at a petition Sunday for the Nobel Peace Prize nomination of two Austrian nuns who devoted their lives to helping leprosy patients in Korea. [KOREAN NURSES ASSOCIATION]

The secretary general of the World Health Organization (WHO) on Sunday threw his support to a campaign to nominate two Austrian nuns who devoted their lives to helping leprosy patients in Korea for the Nobel Peace Prize.

The Korean Nurses Association (KNA) ran a booth at a congress held by the International Council of Nurses (ICN) at a hotel in Singapore from last Tuesday to Monday to advertise a pan-national campaign to nominate Marianne Stoeger and Margaret Pissar for one of the world’s most distinguished awards for peace. South Jeolla Governor Kim Yung-rok on Thursday attended the event to throw his support to the campaign.

Sisters Marianne, 85, and Margaret, 84, are renowned in Korea for having spent 43 years on Sorok Island, off the coast of South Jeolla, to care for patients suffering from Hansen’s disease, more common known as leprosy.

During his visit to the convention on Sunday, WHO Secretary General Tedros Adhanom Ghebreyesus agreed to support the KNA’s bid to nominate the two nuns, and signed his name on a petition. The president of the International Council of Nurses, Annette Kennedy, said she would also help, as did many other nurses who visited the booth from all over the world.

The two sisters arrived in Korea in the ’60s, fresh out of medical school, to volunteer at a hospital for Hansen’s disease patients quarantined on Sorok Island. The facilities they found resembled an internment camp, isolated and secluded from the public due to a widespread fear of contagion. First established by the Japanese in 1916, the hospital interred patients under brutal conditions, regularly subjecting them to abuses like forced labor, beatings, abortions and sterilizations.

For decades, the nuns worked to improve living conditions for patients on the island, providing them food, medication and financial support through personal initiatives and, perhaps more importantly, working to restore patients’ dignity. In time, they helped build facilities for the patients, like a psychical therapy center, psychiatric ward and a day care center for children.

In 2005, the pair left Korea, leaving behind only a modest letter that explained their advanced age prevented them from helping patients further. Only around 400 patients are still believed to reside on the island, most of them in their 50s and above.

One of the most active advocates for the two sisters’ nomination for the Nobel Peace Prize is Former Korean Prime Minister Kim Hwang-sik, who has led a civic group’s efforts to gather signatures all over the country.

In an interview with a local newspaper last week, Kim said the petition had almost 900,000 signatures and was due to hit one million this month.

The group plans to submit the petition to the Norwegian Nobel Committee next year, on the 200th anniversary of the birth of Florence Nightingale, the English social reformer whose name has become synonymous with the charitable work of nurses.

Despite almost a negligible risk of contagion due to advancements in treatment and prevention, leprosy still holds a stigma among the general public in Korea and around the world. According to provincial officials in South Jeolla, the campaign to nominate the two nuns is Korea’s way of showing gratitude to their efforts to attend and help patients in need while everyone else turned away.