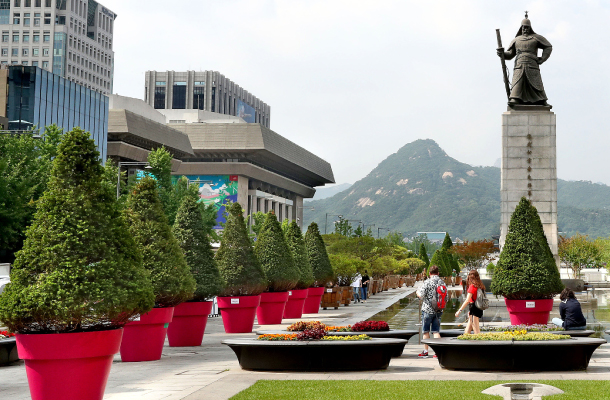 Sizable potted trees dot Gwanghwamun Square in central Seoul on Monday as the Seoul Metropolitan Government tries to prevent a far-right political party from illegally setting up tents in the area. [WOO SANG-JO]

The potted trees, which are around 3 meters (9.8 feet) tall and wide, were installed near the Admiral Yi Sun-shin statue about 3 meters from each other.

They were put in place after 2 p.m. on Sunday, shortly after police officers dispersed from Gwanghwamun Square following South Korean President Moon Jae-in’s summit with U.S. President Donald Trump at the Blue House, which is nearby. The Seoul city government said the trees include zelkova and pine trees.

The trees were placed in the same location that members of the Our Republican Party, which currently occupies two out of 298 seats in the National Assembly, set up tents from May to June without receiving permission from the Seoul government to call for Park’s release.

Park was impeached in 2017 and sentenced to 25 years in prison last year for corruption and power abuse.

The predecessor of the Our Republican Party was the Korean Patriots Party, which was established in August 2017 by former members of the Saenuri Party who stood by Park even after a corruption scandal led to her impeachment, removal and trial for corruption and abuse of power. Park was part of the Saenuri Party, which changed its name to the Liberty Korea Party in February 2017 to distance itself from her.

The Korean Patriots Party changed its name to the Our Republican Party late last month following its own internal strife.

After weeks of wrangling over the tents in Gwanghwamun, the Seoul government demolished them on June 25 through an administrative order, leading police to scuffle with Our Republican Party members.

The party repitched their tents later the same day. Last Friday, a day before Trump was to arrive for a two-day visit, they relocated the tents near the Seoul Finance Center, about 400 meters away.

The party, at the time, said it was temporarily moving their tents due to security reasons and because they wanted to “welcome” Trump to Seoul. Once Trump leaves, the party said it would return to Gwanghwamun Square.

The Seoul city government’s move to place trees on the square was aimed at scotching that plan.

Rep. Cho Won-jin of Our Republican Party, the party’s co-chairman and a strong advocate of Park, said Monday during a press conference that his party would go back to Gwanghwamun Square and “continue its battle” to free the former president and denounce the current left-leaning administration. Cho, however, did not give a specific date.