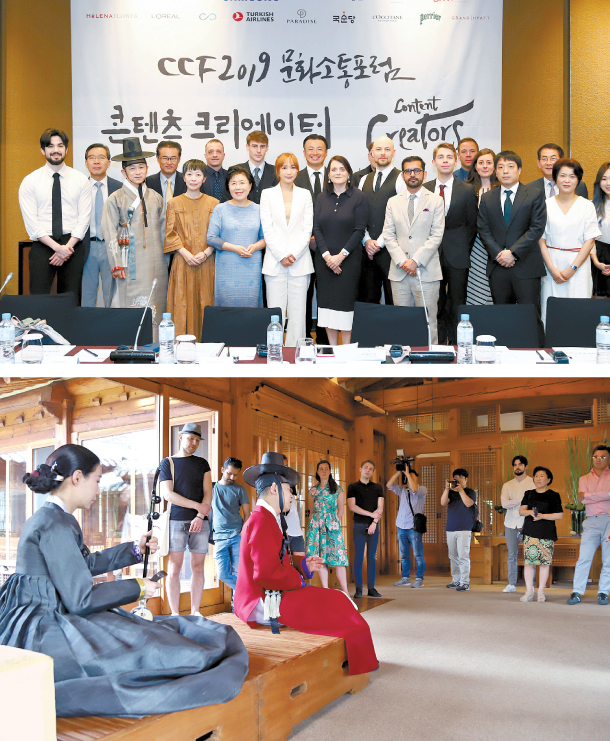 This year’s Content Communications Forum (CCF), organized by the Corea Image Communication Institute (CICI), was held from June 30 to July 2, ending with CCF Night on Tuesday evening. Yet again celebrating and honoring cultural figures who are bridging Korea to the rest of the world, the 10th CCF Night took place at the Grand Hyatt Seoul Hotel in central Seoul, and was an international gathering of top cultural influencers.

The Forum kicked off on June 30 with an official dinner hosted by Choi Jung-hwa, the president of CICI and the “CCF delegates,” 12 people who are prominent in their fields, ranging from music and pop culture to cooking and film.

The delegates spent Monday touring some of Seoul’s meaningful cultural attractions, starting with the Korea Furniture Museum, where they got to witness the traditions of Korean home life.

The tour was followed by a luncheon at Onjium in Jongno district, central Seoul and stops at other venues such as the National Museum of Korea, the Amorepacific Headquarters, the Hyundai Card Music Library and dinner at Congdu in central Seoul.

This year’s roster includes perhaps the youngest generation of figures the institute has invited thus far, as CICI sees that “content creators who communicate with the public through their own unique contents is rising year after year,” according to president Choi.

The 11 delegates - with the exclusion of the Turkish YouTuber - kicked off Tuesday’s day of events with a panel discussion titled “Trends in content creation and communication methods.”

The panelists were each given time to share their thoughts on Korean culture and how it could be improved in the coming years.

“There’s a saying in Korea that goes, ‘Mountains and rivers change within 10 years of time,’” said Choi, opening Tuesday’s discussion. “We first held the CCF in 2010 in Seoul, to celebrate the Group of 20 summit. This year is the event’s 10th. It is great to see that such a change in the way that Korea communicates with the world has happened during that time. I am honored to be hosting CCF with the most renowned figures in the world.”

“We strongly believe that we can share various images of Korea seen from different perspectives, and have the chance to discover new aspects of Korea through this year’s CCF 2019,” said Choi.