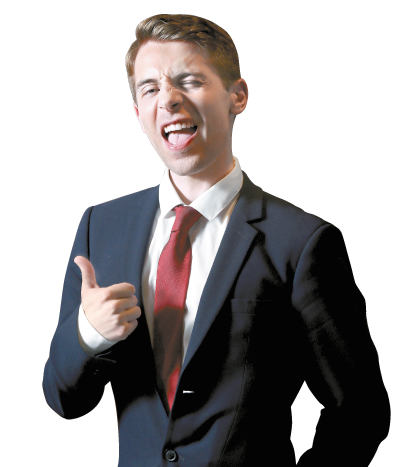 For Koreans living in Korea, it can be difficult to escape K-pop’s influence; the stars are on every TV channel, their music is played on speakers at almost every shop and cafe and advertisements almost always feature smiling members of boy bands or girl groups. But how does K-pop look and sound to international fans who aren’t constantly surrounded by the Korean entertainment industry?

For years, Jeff Benjamin, a K-pop columnist at Billboard who has also had his work appear in the New York Times, Rolling Stone, Teen Vogue and elsewhere, has been writing about K-pop from his perspective as an American music journalist. Benjamin began covering K-pop in 2013, and has been recognized in Korea for spreading the word of Korean music to an American audience, and even predicting the global success of K-pop acts like BTS.

“What I loved about K-pop is that it thought about the whole picture - it’s not just about the music,” Benjamin said. “It was about the music videos, the performances, the music programs, the members, how the groups were constructed, their concept and the colors. All these things were so well thought out. It was like pop music brought to a new level.”

Benjamin sat down with the Korea JoongAng Daily to talk about his love of Korean pop culture and more on Sunday, prior to Tuesday’s Culture Communications Forum (CCF) 2019 main event held on Tuesday evening at the Grand Hyatt Seoul Hotel, central Seoul, where Benjamin was one of the event’s featured guests.

Q. What drew you to K-pop in the first place?

A. I am a big music fan just in general. My mom played a lot of music when I was little. Everything from the Beatles, Italian opera, she had a belly dancing phase so there was Middle Eastern music in the house for a while. I always grew up with this idea that music could be great no matter what language [or] where it came from.

What do you think attracts people to K-pop despite the language barrier?

I think that younger people these days are so much more open to different kinds of music. Also, the fact that K-pop has [so many] other styles. It’s not just about the music - it has an entertaining music video and choreography set to it too. There are so many additional elements to get people excited about the music that they [are able to] overcome the language barrier.

Do you have any difficulties analyzing K-pop while not being able to speak Korean?

That’s where the international K-pop fandom and community is so amazing. In hours, there will be websites that have translated it, all the lyrics, and they will have the member distribution - who sings what part. [And] there will be analysis - there will be all these things that are ready to go. And I think because fans themselves are so passionate about these artists, they want more people be able to understand and be able to connect with.

When it comes to pop music [in general,] whether it’s in English, Spanish or Korean, lyrics are just one part of the song. I think pop music is more about how [the music] makes you feel, how it energizes you in that way. People can connect as just people, regardless of languages.

Are there any differences between the fan culture in Korea and fans outside of Korea?

From what I understand, yes. But to me, the most amazing part is that there are so many things that are very specific to the K-pop scene, like voting on music programs or staying up to watch V-Live. But there are so many people around the world who want to be a part of that.

I don’t think other countries have music like that. People are trying to not only listen but understand it in a larger and in deeper way. That was a really eye opening moment. So on one hand there are a lot of differences between Korean and international fans. It’s amazing to me that international fans want so badly to learn from Korean fans, and I think it’s kind of beautiful.

Would you say that the international fans are coming to understand the Korean sense of “idol” and our usage of the word?

I can’t tell. Of course, BTS put out that song, “Idol,” right? And I wonder, if more people checked out that word after that song came out, because RM opens the song with the great line, “You can call me idol, You can call me artist.” The whole message is that it doesn’t matter what you call me, I’m still going to be myself and love myself. You can’t stop me from loving myself.

I think when something like these scandals are popping into headlines, it’s that the idea of ‘K-pop’ is supposed to be perfect and they’re idols and ideal performers. Then, it creates this kind of disconnect between what’s seemingly a not perfect, dirty kind of thing, compared to the ‘perfect idols.’ I think that’s when that starts being analyzed a bit more. But I think in the larger scheme of things, it’s not the most significant thing. It’s more about, there are boy bands and girl groups, and the kind of connotations that come with boy bands and girl groups.

Do you think there will be other groups like BTS?

Oh, gosh. We’ve got to keep BTS as BTS. The thing is that you can’t deny where they are at or who they are. Lots of people ask me, ‘Who’s the next BTS?’ I don’t like the question that much because I feel like it’s a little sad. Did anyone predict that BTS would be such a success? Did anyone predict that Psy would be such a success? I think it’s anyone’s game, who it could be. I think if you really go for it, if you’re really strong in your message and your viewpoint and you put in the hard work, it’s really anyone’s game.

Do you think international fans’ interest in K-pop has led to interest in other aspects of Korean culture?

I think so. I think it is happening because you can look at the numbers, right? I think Korean culture is so intrinsic to the K-pop music scene. But again, as I was saying before, K-pop fans aren’t just fans of music. They are fans of the videos, dramas, TV shows they go on, and all these things are big parts of Korean culture connected to them. So I feel like so many people want to try the foods that they see their idols eating or learn about fashion brands, use the products that they endorse.