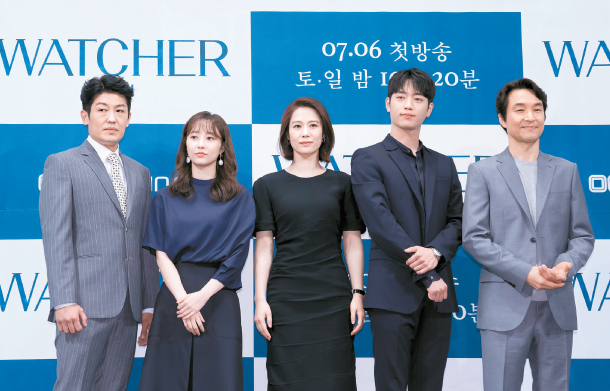 From left, actors Heo Sung-tae, Kim Joo-hee, Kim Hyun-joo, Seo Kang-jun and Han Seok-kyu pose at a press conference for the new OCN drama series “Watcher.” The series is about an inspection team on a mission to resolve a mysterious case that changed their lives 15 years ago. [CJ ENM]

“I wanted to tell a story about an inspection team that’s usually told only as subplots in a drama series,” said director Ahn Gil-ho as he told the press how he came up with the idea for his new show “Watcher,” which will air on the OCN cable channel. “[The story is told through] different perspectives of three main characters who become intertwined through one incident that occurred 15 years ago which ultimately changed their lives.”

Han Seok-Kyu, Kim Hyun-joo and Seo Kang-jun play the lead characters, who eventually work together as an investigation team to single out corrupt forces among the police.

For Kim and Seo, who mostly appeared in romantic comedies or melodramas, “Watcher” posed a new challenge for them as an actors.

“Since I’m a passionate police detective, I have a lot of action scenes, and it was actually my first time [to have a lot of violent action],” said Seo, who plays Kim Young-kun. “But it was fun doing so and monitoring my moves. Moreover, I was attracted to the drama because the story wasn’t just focused on the inspection process, but about the people behind it - their painful history, the development of their characters and ultimately, how they are able to overcome their agony and be healed.”

Kim, on the other hand, was attracted to her character, Han Tae-joo, a lawyer who only defends criminals. “My character, Han, was what drew me into the series in the first place,” said Kim. “But I guess as an actor, I’ve always had this desire and thirst to try out for new roles, and when I read about Han [in the script], I wanted to challenge myself.”

She added that although it wasn’t easy stepping into a new genre, focusing only on her character and her development helped her to overcome acting difficulties.

Han will appear on the cable network after a two-year hiatus from television. But Han told the press it was the story that drew him into the role. Han stars as Do Chi-kwang, an elite police officer in charge of the inspection team.

“In the ‘Watcher,’ the three characters saw something 15 years ago and firmly believed that what they saw was the truth,” said Han. “That’s how the first episode starts. But as the story develops, the trio come to realize what’s on the surface is not all that it seems and penetrate more deeply into the case that changed their lives all those years ago.”

“There are so many things to see nowadays,” Han continued. “I think all of the actors have similar professional concerns to provide the viewers with something worthwhile to see, but I personally think and wish for ‘Watcher’ to satisfy people with its gripping plot and visuals.”

The director also clarified the title of the drama series, which he thought perfectly correlates with what the story wants to tell the viewers.

“The meaning of the title is that the mere witnessing of something or an incident can prevent future mistakes or misfortunes,” said Ahn. “People may think the title derives from the surveillance part of the inspection team, but we named it more with the purpose of being a witness.”

The OCN drama series will begin airing on this Saturday at 10:20 p.m.