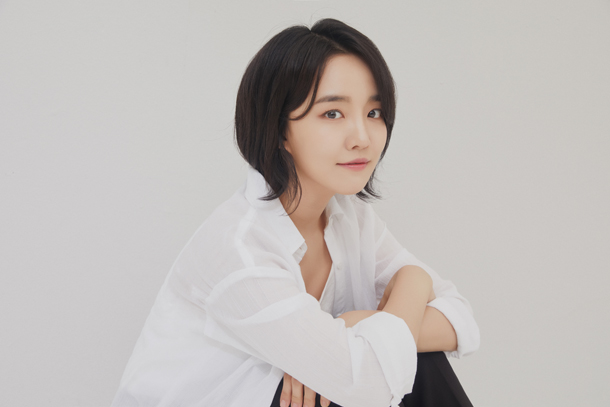 It’s certainly not common for a singer to be associated with a particular weather phenomenon, but Younha’s relationship with rain is a well-known love affair.

The 31-year-old singer, who debuted at the tender age of 16, cemented her position as one of Korea’s most recognizable female singers with a series of hits that include many songs about rainy days. Notable tracks such as “Sound of Rain” (2008), “Rain Shower” (2012) and “Umbrella” (2008) have all helped grow Younha’s career. “Umbrella,” a song by hip hop group Epik High featuring Younha, was such a huge success when it came out that the singer has since re-released a version of her own.

And judging by the forecast, Younha’s not done singing about rain just yet.

On her five-track EP “Stable Mindset,” released yesterday, the singer unabashedly presented two ballads about wet weather - “Rainy Night,” which she wrote herself, and the lead track “On a Rainy Day,” composed by DOKO, who’s previously worked as a vocal director for groups Twice and Stray Kids.

On both tracks, the singer croons about the nostalgic and complicated emotions that she feels when it rains.

“Remember me on a rainy day...,” go the lyrics of “On a Rainy Day.” “Let my memory-filled tears soak your shoulders.”

Left: Younha’s EP “Stable Mindset” was released on Tuesday. Right: A screenshot from the music video teaser for “On a Rainy Day,” the lead track off her new EP. [C9 ENTERTAINMENT]

During an interview ahead of the album’s release, however, Younha admitted that she didn’t always like the rain as a child.

“I actually didn’t like the rain when I was younger - it gets on your clothes,” the singer said last Thursday at a cafe near Hongdae, western Seoul.

“But people started telling me they think of my voice on rainy days, and my songs would actually climb up the charts when it was raining. I think rain might be my fate.”

According to the artist, “Stable Mindset” is an effort to return to the style of music fans are familiar with hearing from her - soulful ballads that show off her wide vocal range and expressiveness. For her last album “RescuE” (2017), the singer experimented with more upbeat and electronic sounds, much to fans’ surprise.

“I really like trying new things, but people are surprised when I do,” the singer said. “It’s not necessarily negative feedback, but I can see it in the fans’ expressions during concerts. It seems like they’re thinking ‘It’s alright, but we’ll listen to the songs anyway since it’s yours.’”

Having worked in the music industry for nearly half her life, Younha has amassed a devoted fanbase that has grown up listening to her songs for over a decade.

When the singer attends fan meetings, it’s quite normal for her to recognize the familiar faces of avid fans, many of whom who know her hits by heart.

“At a recent meeting with fans we played a game of who can guess a song after just hearing it for one second,” she said. “They were even better at the game than me.”

“My fans are some of the people that I’ve known for the longest time. I even give them nicknames.”

Since last month, the singer has hosted her own radio show on the streaming platform V Live, where she plays some of her favorite songs - including her own hits - and reads stories sent by fans.

Younha has plenty of radio experience, and she’s learned to make the most out of her soothing, gentle voice. She previously served as a DJ for the MBC radio show “Starry Night” for over three years.

“I think the world has really developed,” she said. “It’s become easy for people to launch one-man projects online.”

When she’s not doing music or interacting with fans, Younha keeps herself busy with her favorite hobbies - making candles and arranging flowers.

“My music studio’s become more of a craft workshop,” the singer laughed. “But I like making things and gifting my creations to others. It helps me relieve my stress.”

With “Stable Mindset” being her first official release in a year and seven months, Younha is ready to pour her energy into her music career. She’ll hold a series of concerts from July 26 to Aug. 4 at Dongduk Women’s University in northern Seoul. It’ll be the first time in three years that the singer will be holding intimate gigs to get up close and cozy with fans.

Another album is also on the way, potentially for a release by the end of the year, the singer hinted.

“I’m working on another album now that’s a bit more wintery, with some rock elements,” she revealed. “When paired with ‘Stable Mindset,’ it’ll seem like all the seasons are there.”

For now, Younha can only hope that songs on “Stable Mindset” will strike a chord with her fans, especially those who remember her earlier rain-related hits.

“It would be really good to place No. 1 on music charts, but from my experience, when I want something, it doesn’t work out, so I’ll try to [not worry about it],” Younha said.

A little rain wouldn’t hurt as well, the singer added. “I hope it rains a lot, but not too much, because I don’t want there to be any floods. Just enough.”