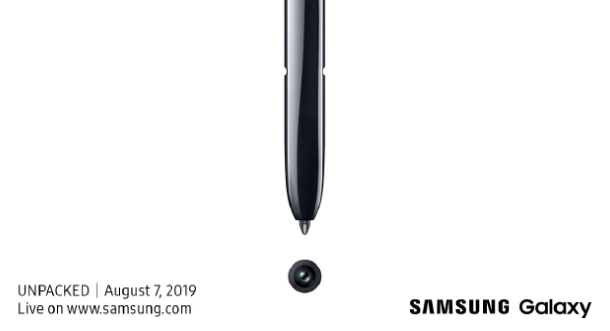 Samsung’s Galaxy Note10 will be unveiled on Aug. 7 at the Barclays Center in New York.

An invitation for the latest Samsung Unpacked event was sent to press on Tuesday. The email did not pinpoint which Galaxy phone was going to be unveiled at the company’s annual unpack event, but it did include an image of what appears to be a camera lens and Samsung’s S Pen, the stylus supplied with its Note phablets.

Samsung keeps the details of its smartphones under wraps before the unpacking event, but hints at what has been upgraded through the image on the invitation - in this case the stylus and camera. Last year the stylus was redesigned for the Note9 to be smarter with Bluetooth functions that enabled it to be used as a remote to trigger the camera or play videos.

According to a leaked image of the Note10 by YouTube channel TechTalk TV in late June, the new phablet has a front camera located in the center at the of an “Infinite-O” display. If true, this would mimic the style of the camera on the Galaxy S10, which minimizes the bezel by having a hold cut-out for the front camera in the screen itself.

The video also showed a vertical lineup of cameras on the back, although it was unclear how many there were.

Some local and foreign reports speculate that the Note10’s stylus will have upgraded camera-related functions. They cited a U.S. patent granted in February that demonstrates an “electronic pen device” that contains a camera with an optical lens at the back and can be used to send photos to the phone.

Based on leaks and rumors reported so far, the Galaxy Note10 is likely to come in two versions, including a larger “plus” model.

Each model is expected to come in both 4G LTE and 5G versions, although local reports suggest Samsung may only release the 5G version in Korea.