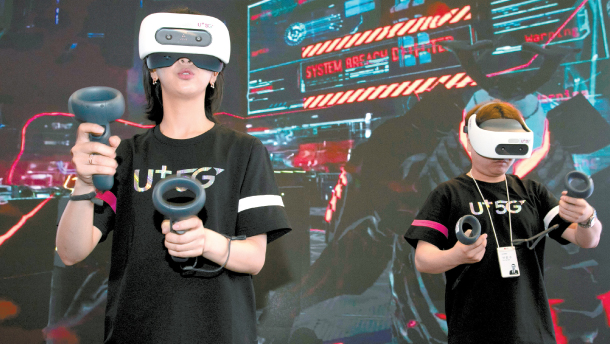 The new system, announced Tuesday, will consist of a 5G-connected cloud platform from which games can be streamed to a VR headset that is able to sense not only where users are looking and how they move their heads but also more advanced motions like changes in elevation, strafing and movements forward or backward.

This level of movement detection is currently mainly found in expensive high-end headsets or static systems that use external sensors to monitor movement.

LG U+ has not yet specified which headset it will offer as part of the service, only that “multiple devices” will be made available. Currently, the Oculus Rift, HTC Vibe and Pico Neo are the most common VR headsets on the market that offer this level of movement detection.

The headsets LG U+ intends to use operate on a positional tracking system called “six degrees of freedom.” The system is a more advanced version of the “three degrees of freedom” found on cheaper VR headsets, which can track movements of the head vertically, horizontally and tilting from side to side. A six-degrees-of-freedom headset also tracks the head moving forward and backward, side to side and up and down. This allows users to approach or back off from objects and use handheld accessories.

Until now, this level of movement generally required a VR headset to monitor the basic three movements, external sensors to monitor body movements and a powerful computer to process all the information in real time.

“Our motivation in preparing a cloud VR game platform was because installing equipment for high-quality VR games was a pricey and complicated job for our users - we thought this problem could be overcome with 5G’s low latency,” said Lee Sang-min, LG U+’s head of 5G services, at a press conference on Tuesday in central Seoul.

Although there are already advanced headsets like the Oculus Rift on the market, the problem is that they’re very expensive. LG U+ thinks this is where 5G can make a difference.

“A major reason high-quality headsets were expensive until now was because of the memory used for playing VR games - some can take up to as much as 100 gigabytes,” said an LG U+ spokesman.

“But 5G will make it possible to stream these VR games from a cloud. If the device becomes lighter we’ll be able to pull down its price and hence make it more accessible to a wider audience.”

The price of LG U+’s headset is undecided as negotiations will have to be held with the partnering manufacturer, the spokesperson said. The package will also include subscription fees for access to the VR gaming content.

Before the launch of its VR game powered headsets, LG U+ will give customers a chance to try before they buy. The carrier will install VR trial booths at its headquarters in Yongsan, central Seoul, Magok, western Seoul, and 90 LG U+ branches nationwide.

At these locations, customers will be able to try out 20 VR headset games by next month, including the 10 most popular VR games on Steam - the largest online distribution platform for PC games - and 10 offered by its content partners Lotte World and Kakao VX, an augmented reality (AR) and VR content developer under Kakao.

Apart from the games offered globally on Steam, content offered by local partners will include VR theme park rides like roller coasters from Lotte World, and a theme park-concept game starring the Kakao Friends. For Lotte, which has developed 10 VR ride experiences, LG U+ is the sole platform on which it releases its games. Kakao said it will work exclusively with LG U+ “for a while,” but plans to expand its partnerships in the future.

Tuesday’s announcement comes as LG U+ strives to secure competitive gaming content that works on 5G. In March, LG U+ also announced a partnership with Nvidia to be its exclusive provider of GeForce Now, Nvidia’s cloud-based gaming program.