Honoring Hyomyeong’s legacy: Exhibit looks at the contributions made by short-lived prince

Honoring Hyomyeong’s legacy: Exhibit looks at the contributions made by short-lived prince 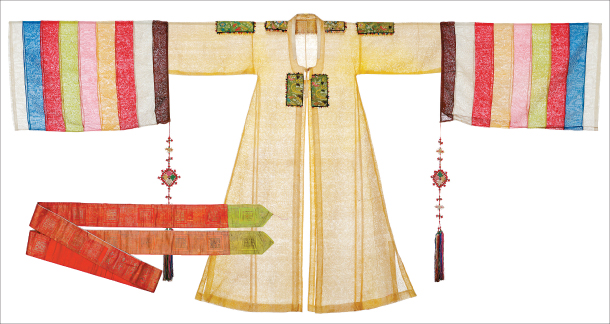 The subject of the latest National Palace Museum of Korea exhibition, Crown Prince Hyomyeong (1809-30), may surprise many people. When the palace museum in central Seoul sheds light on a specific person - the most difficult type of exhibition to curate, according to the museum - it’s usually reserved for the kings who ruled Korea for many years. On the contrary, Crown Prince Hyomyeong was only 20 when he died. He had only served for three years as a regent, governing the country as the next in line after his father, King Sunjo, the 23rd king of the Joseon Dynasty (1392-1910).

What could this young crown prince have possibly left behind to make the museum organize a special exhibit focusing entirely on him?

“Visitors will understand when they see the exhibition that Crown Prince Hyomyeong indeed left a big mark on Korea’s history,” said Ji Byong-mok, the museum’s director. “I think the prince was exceptionally bright ever since he was a young boy. His father, King Sunjo, saw a ray of hope in his bright firstborn son and carefully groomed him to be the heir to the throne. Although the crown prince died suddenly only three years after his reign began, his accomplishments in politics, literature, royal banquets and jeongjae (court dance and music) were significant.”

The exhibit, titled “Hyomyeong: Crown Prince and Patron of the Arts,” which kicked off on June 28, focuses on the prince’s achievements and aspirations by introducing a wide range of objects, archival materials and digital media, providing a look at the brief, yet resplendent impression the crown prince made on history. The exhibit is largely divided in four sections. In the first “Life of Crown Prince Hyomyeong” section, visitors can witness how Hyomyeong received an education that prepared him to become the next heir.

“In 1812, just three years after he was born, Hyomyeong was appointed the crown prince, and when he just turned 4, King Sunjo made him master a set of Chinese characters known as the Thousand-Character Classic,” explained Son Myeng-hee, the exhibition’s curator.

In this section, the “Painting Album Depicting the Matriculation Ceremony of Crown Prince Hyomyeong into Seonggyungwan (National Confucian Academy)” is on display. According to Son, this album is symbolic in that it shows how the crown prince participated in the entrance ceremony together with regular students and that he was educated not by himself but with others. 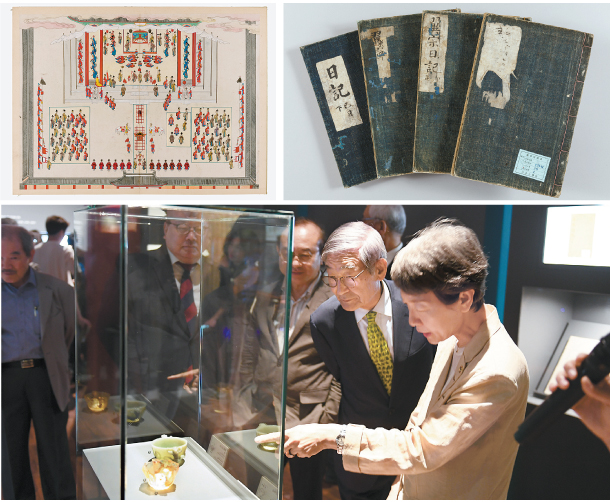 In 1819, at the age of 10, the crown prince participated in a coming-of-age ceremony and in that same year, he was married to the daughter of Jo Man-yeon.

Visitors can also witness in this section, a half-burnt portrait painting of Hyomyeong that was painted in 1826. The portrait depicts the prince at 17, wearing the finest royal ceremonial robe. Yet more than half of the painting was destroyed in a fire in 1954.

Although he never reigned as a king during his lifetime, this section also explains how the crown prince was posthumously proclaimed king, then emperor.

The second section, “Hyomyeong: The Poet of the Royal Court,” highlights the poetic side of the crown prince. During his lifetime, he showed a great talent for writing poetry. In 1826, he built a study for his collection of books in the rear garden of Changdeok Palace and named it Seokgeo Seosil. The following year, it was renamed Uiduhap, meaning “learning against the star.” This small, beautiful study was where Hyomyeong read books and composed poems. 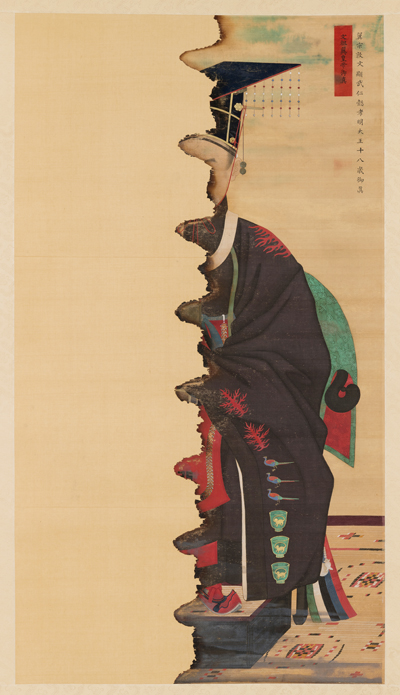 Portrait of Crown Prince Hyomyeong when he was 17. Half of the painting was destroyed in a fire in 1954. [NATIONAL PALACE MUSEUM OF KOREA]

In this section, visitors can read some of his beautiful compositions including “Ten Scenic Views of Uiduhap,” the poem he wrote praising the beauty of the structure’s architectural elements, like the east pavilion and the northern railings of his study.

During the three years of his reign, Crown Prince Hyomyeong commissioned new buildings within the palace grounds to secure his legitimacy as sovereign and a patron of the arts.

This can be seen in the third section, “Crown Prince Hyomyeong and His Palaces,” where “Painting of Eastern Palaces” is exhibited. The work depicts his administrative and private spaces in detail, indicating his influences on the palace complexes. A large screen has been set up so visitors can get a closer look.

The final section, “Royal Banquets and Jeongjae,” is the most dynamic part of the exhibition. It uses a number of moving images to show court dances and music that were created by Hyomyeong.

The crown prince was a man of banquets and feasts. He held a small banquet to celebrate the bestowal of honorific titles to King Sunjo and Queen Sunwon in 1827. The following year, he hosted a banquet to celebrate Queen Sunwon’s 40th birthday. In 1829, he held the most lavish banquet of his reign to commemorate King Sunjo’s 40th birthday and the 30th anniversary of his accession.

For these ceremonies, he created dozens of jeongjae that included lyrics he wrote himself. Here, visitors can watch animated video clips of the royal banquet dances. Some of the relics on display have been borrowed from the Grassi Museum of Ethnology in Leipzig, Germany.

The exhibition runs until Sept. 22. Admission is free. The museum is open daily from 10 a.m. to 6 p.m. On Wednesdays and Saturdays, the museum is open until 9 p.m. For more information, visit www.gogung.go.kr