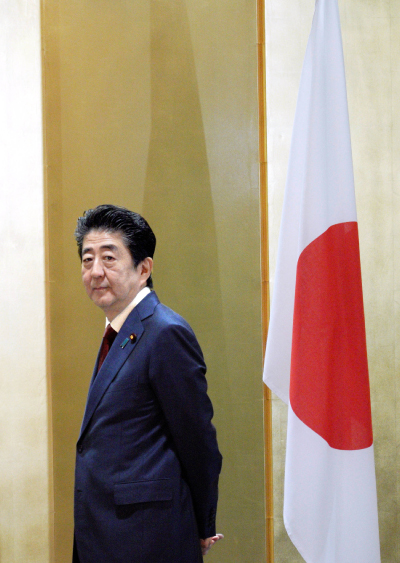 Japanese Prime Minister Shinzo Abe stands ahead of a meeting in Osaka, Japan, where the Group of 20 summit was held, on Sunday. Abe insisted Tuesday that Tokyo’s new export restrictions on Seoul, which come amid a dispute over the wartime forced labor issue, comply with World Trade Organization regulations. [REUTERS/YONHAP]

Abe told the Yomiuri Shimbun in an interview published Tuesday that Tokyo revised trade measures with Korea that were based on “mutual trust” in deciding to impose the restrictions, implying that the restrictions would go into effect because mutual trust has been breached.

Abe was not reported to have specifically pointed out the crux of the issue, which Korea maintains is economic retaliation for Supreme Court rulings awarding damages to Koreans forced to work for Japanese companies during colonial times.

Abe was quoted as saying that his government’s move, which goes into effect on Thursday, was “irrelevant” to free trade, and maintained that Japan stuck by regulations of the WTO.

The remarks were Abe’s first public comment on the issue after Japan’s Ministry of Economy, Trade and Industry announced Monday it will place restrictions on the exports to Korea of key materials used in semiconductors and smartphones.

Seoul immediately accused Tokyo of retaliating against the Korean Supreme Court’s rulings ordering Japanese companies to compensate Korean workers forced to provide labor during Japan’s colonial rule of the Korean Peninsula from 1910 to 1945.

The Japanese government did not explicitly say Monday that the export restrictions were linked to the rulings.

Tokyo’s Economy Ministry, however, said trust between Seoul and Japan was “harmed” as Seoul failed to lay out “a satisfying solution” to the forced labor problem last week during the Group of 20 summit in Osaka, Japan. The ministry said the restrictions weren’t an embargo, but stressed that more materials could face export restrictions in the future.

Sung Yun-mo, Korea’s minister of trade, industry and energy, said later Monday that Seoul expressed “deep regret” over Tokyo’s decision, adding it would take “necessary measures” to resolve the issue, including filing a suit with the WTO.

Korean President Moon Jae-in has yet to make a public comment on the issue. A senior presidential aide told Blue House correspondents Tuesday that the “government’s stance will continuously be announced through the Trade Ministry,” effectively refusing to take media inquiries on Moon’s view.

Three materials will be subject to restrictions: fluorinated polyimide, needed for smartphone displays, which Japan holds a monopoly on global production of; hydrogen fluoride, used to remove unnecessary chemical substances during semiconductor production; and photoresists, a light-sensitive polymer used in semiconductor production, which Korea mostly imports from Japan.

Starting Thursday, the chemicals will no longer be eligible for preferential treatment, meaning Japanese exporters must receive permission from the Japanese government each time they want to ship the materials to Korea, a screening process that can take about three months. The Yomiuri Shimbun called the measure “a de facto embargo” because Tokyo plans not to grant permission in principle.

Korea’s Samsung Electronics and SK Hynix are expected be the hardest hit companies, as their supplies of the three materials are almost entirely from Japan.

The Japanese government also said it would start proceedings to remove Korea from a so-called “white list” of 27 countries that face minimal restrictions on importing products with national security implications, such as integrated circuits. After canvassing public sentiment, Tokyo will revise the ordinance by the end of August, Yomiuri Shimbun reported.

A group of lawyers representing Koreans forced to work for Japan’s Nippon Steel & Sumitomo Metal said Tuesday that Tokyo’s economic retaliation was aimed at “covering up the truth,” stressing legal procedures to seize the Japanese company’s assets here will continue.

Both companies have refused to comply with the rulings, and the plaintiffs asked local courts for seizures of the companies’ assets in Korea. Hundreds of Korean victims of wartime forced labor and their surviving families have expressed their intent to file suits with local courts against Japanese companies.

Japan insists that its compensation of $800 million in loans and grants to the Korean government in 1965 settled all property and claim disputes between the two parties, and rejects the latest forced labor suits by Korean victims.

Seoul’s foreign minister, Kang Kyung-wha, said Tuesday in response to Tokyo’s export restrictions that the Korean government will “research follow-up measures while looking at the situation.”