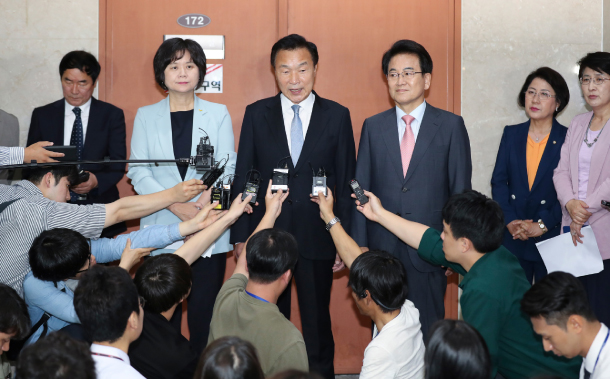 Heads of minor opposition parties speak to reporters on Tuesday at the National Assembly. From left: Lee Jeong-mi of the Justice Party, Sohn Hak-kyu of the Bareunmirae Party and Chung Dong-young of the Party for Democracy and Peace. [LIM HYUN-DONG]

Cracks are forming in the ruling Democratic Party’s (DP) alliance to push through electoral and judicial reform after it struck a deal with its main rival party to replace the heads of two powerful parliamentary committees leading the reform efforts.

Three minor parties - the Bareunmirae Party, Justice Party and Party for Democracy and Peace - that are allied with the ruling DP to pass a handful of reform bills held a joint press conference at the National Assembly on Tuesday to protest the DP’s deal with the main conservative Liberty Korea Party (LKP) last Friday.

With the compromise, the DP and LKP agreed to extend the mandates of two special legislative committees tasked with reviewing the bills, effectively ending months of partisan stalemate caused by the LKP’s opposition to the fast-tracking of the proposals in April. In exchange for extending the committees’ mandate, which ensures the bills are reviewed, the DP agreed to hand over one of the two committees’ chairs.

The bills in question include one on electoral reform, which proposes adjusting the number of single member districts and proportional representation seats in the legislature. This bill has been packaged with three bills on judicial reform, the most prominent being a proposal to create a new agency specifically tasked with investigating corruption by high-ranking civil servants.

For the minor parties, the question on electoral reform is an important one, since many of their members believe it is the only way for their parties to survive the upcoming parliamentary elections next year. But Friday’s agreement also removed one of the most vocal advocates for electoral reform - Rep. Sim Sang-jeung of the minor leftist Justice Party - as chair of the special committee on political reform, one of the two committees.

The Justice Party cried foul at what it characterized as an act of tyranny by the larger parties, with its leaders calling out the DP in particular for undermining the partnership between the parties by making the decision without consulting the Justice Party.

The DP is set to decide the chairmanship of which of the two committees - the second being the committee on judicial reform - to offer to the LKP on Thursday. On Tuesday, however, the minor parties made clear that they would not stand by if the chair of the political reform committee was handed over.

“If this agreement passes on the initiative of political reform to the Liberty Korea Party, a force pitted against reform, then electoral reform will go up in smoke in a flash,” said the chairs of the three smaller parties in a joint statement. “This will also imperil political cooperation between the four parties toward reform.”

The parties then called on the DP not to give into the LKP’s obstructionist tactics to derail the bills by completing a review and vote on the electoral reform bill by late August, when the extended mandate of the two committees is set to expire.

Political analysts say the DP may eventually find itself having to choose between judicial or electoral reform, as passing on the chair to the LKP for either committee would allow it to delay procedures indefinitely. The judicial reform bills may be difficult to sacrifice, given its importance to the Moon Jae-in administration’s platform. Giving up electoral reform, on the other hand, could dissolve the hard-won coalition between the four parties.