The NC Dinos is the third club in the Korea Baseball Organization (KBO) to part ways with its foreign players this season. 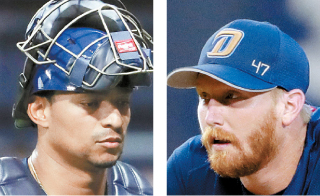 The Dinos announced Wednesday that they’ve parted with catcher Christian Bethancourt and pitcher Timothy Butler. In replacement for Butler, the Dinos signed Christian Friedrich from the New Britain Bees.

Having joined the Dinos this season at the KBO’s highest salary cap of $1 million, Butler hasn’t started since June 18, during a game against the Doosan Bears, due to a shoulder injury.

In Butler’s 13 games in the KBO he has picked up three wins and six losses with a 4.76 ERA.

As the Dinos are getting closer to losing the fifth-place wildcard spot, the last postseason spot, they’ve decided to change things up. Up until May, the Dinos have been retaining their spot at third but since June, they’ve fallen into a severe slump.

Since the start of June, the Dinos have only picked up eight wins and 17 losses, as of Tuesday’s game, to move down two spots. Their struggle has also created an opportunity for the bottom five teams in the league, as the KT Wiz are now only two games behind the Dinos.

As the Dinos urgently need to make their way up the standing in the second half of the season, they’ve decided to undergo some major changes.

This season, Friedrich is playing for the New Britain Bees in the Atlantic League of Professional Baseball, an independent league. Consistently playing as a starter for the Bees, Friedrich picked up five wins and a loss with a 3.00 ERA in 11 games.

The Dinos introduced Friedrich as a pitcher who can throw a fastball with a speed averaging about 145 kilometers per hour (90 miles per hour), as well as breaking balls including a change-up and curveball. He is also considered to have stable control in his pitches.

Friedrich is expected to arrive in Korea sometime this week and undergo a medical test. Once the tests are done, the Dinos will officially sign him.

In addition to Butler, the Dinos also announced they’ve parted with Bethancourt but have not yet found a replacement.

Bethancourt joined the Dinos with high expectations, signing at the maximum contract of $1 million, as an all-around player.

He played mostly as an outfielder at the beginning of the season but as it went on, Bethancourt started playing as catcher, in rotation with Yang Eui-ji.

He was sent down to the Futures League on June 16 and hasn’t returned to the KBO.