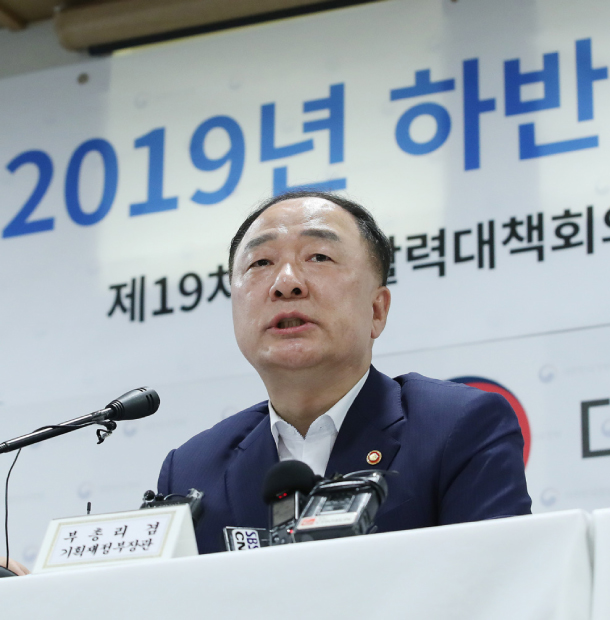 Finance Minister Hong Nam-ki announcing the government’s economic policy plans for the second half at the Export-Import Bank of Korea’s office in Seoul on Wednesday. [YONHAP]

The government was forced to lower its economic growth target for this year seven months after it announced its last projection.

The economy will expand between 2.4 percent and 2.5 percent, the Ministry of Strategy and Finance said Wednesday, 0.2 percentage points lower than the previous target of 2.6 to 2.7 percent. The ministry cited external conditions that are worse than they previously expected, including the prolonged trade dispute between United States and China, and a very weak semiconductor market.

“Both global economic growth and trade have shrunk more than when we made our projection last year,” Finance Minister Hong Nam-ki said during a press briefing. “We have particularly reflected the state of the semiconductor industry, which accounts for one-fifth of our exports. Also we reflected stagnant domestic investments and declining exports over the last seven consecutive months.”

The government also made several readjustments of other economic projections, including the current account balance, whose surplus for 2019 has been reduced from $64 billion to $60.5 billion.

While previously predicting Korea’s exports to grow 3.1 percent compared to the previous year, the government now expects a 5-percent decline for the year. Imports are expected to also shrink 4.1 percent, a turnaround from a 4.2-percent growth prediction.

The projection for private sector consumption growth was also lowered from 2.7 percent to 2.4 percent and companies’ facilities investment are now expected to decline 4 percent rather than grow 1 percent.

Yet when it comes to jobs, the government was optimistic, raising its previous projection of 150,000 new jobs for the year to 200,000.

According to the government, the readjusted jobs target is only possible if various government policies and investment projects are implemented. Most of those depend on the passing of a 6.7-trillion-won ($5.73-billion) supplementary budget that has been stuck in the National Assembly since late April.

The government expects the economy to decline if the supplementary budget fails to pass this month.

“We have presented our targets on the premise that the supplementary budget is passed along with our measures to boost investment in the private sector, whose goal is to reinvigorate our economy in the second half,” Finance Minister Hong said.

The minister said the government will inject 70 percent of the supplementary budget within the first two months of its passage by the National Assembly.

“The reinforcement of the government’s fiscal policy in regaining our economic growth vitality is just the start,” he said, “the fundamental solution is stimulating investment in the private sector.”

Other measures include approving 10 trillion won or more in major construction projects, including a research and development campus in Yangje, southern Seoul, as well as temporary tax deductions for companies investing in facilities and individuals upgrading outdated cars to new ones.

“The main goal is to reinvigorate the economy to counter downward risks,” Hong said. “We will focus on creating a momentum that will firmly help our economy swiftly and energetically rebound when the global economic upturn arises.”

A readjustment of the economic growth target was inevitable. In the first quarter, the Korean economy grew 1.7 percent annually, which was the slowest rate in nearly a decade.

Although second-quarter growth has not been released, it is unlikely to be much better with Korea’s exports declining since December.

Hong added that economic retaliation by the Japanese government for recent Supreme Court decisions will not have a major impact on overall economic growth.

“We believe the actions taken by Japan will not force us to change our economic growth projection,” Hong said. “[However], we will take appropriate actions as they violate the World Trade Organization agreement.”