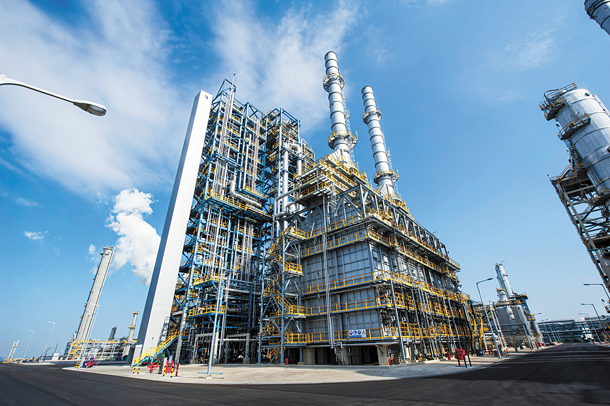 Hyundai Oilbank will invest a total of 260 billion won ($222 million) to expand its aromatic petrochemical production, the company announced Wednesday.

Aromatics include paraxylene and toluene. They are used as base materials for a wide range of products, including synthetic fibers, construction materials, machinery components and PET bottles. Aromatics and olefins are the most common classes of petrochemicals.

If the construction goes as planned, Hyundai said it expects 50 percent of its operating profit to come from the petrochemical business by 2022. Hyundai Oilbank generated 87 percent of its annual profit from oil refining last year.

The 260 billion won investment was made via two subsidiaries, Hyundai Chemical and Hyundai Cosmo.

Hyundai Chemical has already received 100 billion won to expand facilities and the new construction is scheduled to finish this month. After completion, the facility’s annual capacity for mixed xylene will reach 1.4 million tons a year from the current 1.2 million tons.

The other 160 billion won will go to Hyundai Cosmo.

Having recently made the decision to expand earlier this year, the company is now in the process of formulating the plan in detail. According to the current timeline, construction will finish in June next year and increase annual production capacity for paraxylene, one of the most widely used aromatics, to 1.36 million tons a year. The current capacity is 1.18 million tons a year.

Both facilities are located in Seosan, South Chungcheong.

As with its local petrochemical peers, Hyundai is seeking to diversify its portfolio by reducing dependence on the volatile refining business. In May last year, the company announced to invest 2.7 trillion won to build a massive olefin plant, know as the “Heavy Feed Petrochemical Complex (HPC).”

“The expansion is anticipated to boost annual operating profits by 86 billion won,” said a Hyundai Oilbank spokesman. “If we start operation of the HPC olefin plant in 2022, the contribution of petrochemicals to our operating profit will double to 50 percent from the current 25 percent.”