Hyundai’s new engine is better in every way

Hyundai’s new engine is better in every way 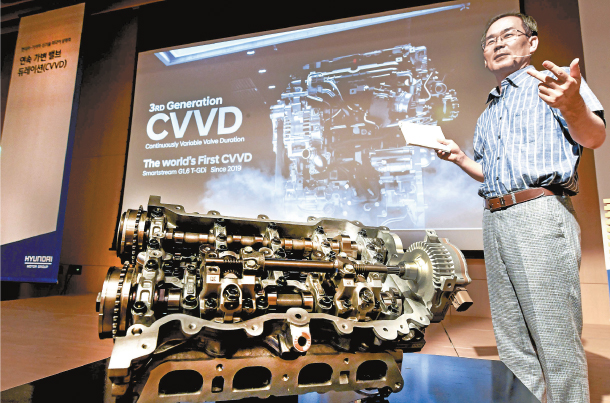 Hyundai Motor Group has developed a new engine system that it claims can kill three birds with one stone: improve vehicle performance and fuel efficiency, while reducing emissions.

During a press conference Wednesday at its studio in Goyang, Gyeonggi, the automaker announced that it has developed a continuously variable valve duration (CVVD) system that, it says, can solve all three of those problems.

Hyundai Motor Group will use the CVVD system in its new Smartstream G1.6 T-GDi engine that will be installed in the new Sonata Turbo to be launched later this year. The four-cylinder turbo-gasoline engine can produce up to 180 horsepower and 27.0 kilogram-force meter (195 pound-feet) of torque.

With the introduction of the CVVD, Hyundai said it hopes to strengthen its position within the global market while staying ahead of tightening emission regulations.

“We will be applying the CVVD technology to minicars, compact cars, midsize sedans and SUVs later on,” said Ha Kyoung-pyo, a research fellow at the Gasoline Engine Research Lab 2 at Hyundai, while presenting the automaker’s newest engine technology.

As the name implies, CVVD can control the duration of engine valves being open and close, as well as the timing.

The system can automatically adjust how long valves are open or closed depending on how a driver pushes the accelerator pedal.

As a result, the CVVD can enhance driving performance by 4 percent and raise fuel efficiency by 5 percent compared to the continuously variable valve timing (CVVT) system widely used across the world at the moment, the automaker said in a statement.

The new system is also in line with Hyundai’s commitment to producing eco-friendly vehicles, as the CVVD can also cause emissions to drop by 12 percent compared to the CVVT.