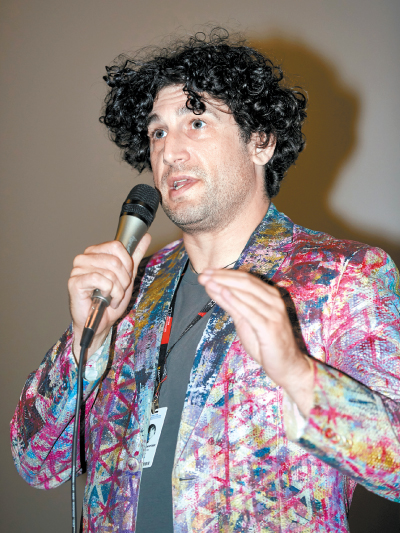 Many people remember their imaginary friend from childhood, with whom they enjoyed imaginary tea parties, sword fights and treasure hunts. After going to school and interacting with real friends, many imaginary friends naturally dissolve from kids’ minds. But what if your imaginary friend wasn’t a friend at all, but actually a demon waiting for just the right moment to possess your body?

When director Adam Egypt Mortimer finished reading the novel “In This Way I Was Saved” by Brian DeLeeuw, he immediately thought the material would be interesting to adapt to film.

“It’s a personal story about a young man struggling about how he feels doing the wrong thing, but the book makes this an external process, which I thought made it so cinematic and I could see how the story could be visualized,” Mortimer told the Korea JoongAng Daily at an interview after his film “Daniel Isn’t Real” screened for the first time at the 23rd Bucheon International Film Festival (Bifan).

Luke first meets his imaginary friend Daniel during a time when he is at his most vulnerable, soon after he realizes that his parents’ relationship was deteriorating and he accidentally sees a gruesome crime scene. Although they get along very well in the beginning of the film, Luke locks Daniel away in his grandmother’s antique dollhouse after Daniel’s advice nearly kills his mother. Several years later, Luke is a law school student and still struggling to adapt in college. His mind wonders until he remembers Daniel again.

Out of curiosity, Luke unlocks the dollhouse and Daniel coyly slips back into his life. At first, the two get along very well and Daniel even helps Luke adjust to his college life. But not long after, Luke begins to realize that Daniel isn’t merely an imaginary friend.

Although the film is a thriller on the surface, it touches upon everyday problems that people face, specifically related to grappling with mental illness and battling inner demons.

Mortimer also went through his own dark periods, like Luke does in the film, which was in part why the story appealed to him in the first place.

Left: Luke’s imaginary friend Daniel helps Luke cheat on a test. Right: Luke and Daniel when they were young. [BIFAN]

“When I was the character’s age, my best friend went through a very tragic mental breakdown that resulted him to being taken to a mental hospital which changed his life forever,” he said. “So when I was reading the book it made me think of that period and what that felt like. When I turned this [book] into a film, I wanted to capture a couple of things to make [those] who have gone through or witnessed something like that to feel recognized.”

He also especially sympathized with Luke because at his age, people usually do not have the ability to recognize their problems or illnesses when it’s happening.

“When you’re 19 years old and in college, everybody is trying to be so creative and trying out different identities. So when one of you is super unbalanced, it’s very hard to recognize it. That problem can get worse and worse without having anyone to help you.”

Luke’s anxieties are portrayed very vividly in the film through the disorientation of colors and sounds. When the audience sees it on screen, they are able to experience the confusion the character goes through.

“I also have anxiety issues, and for years and years I was always trying to solve everything through other [means], mainly physical - yoga and boxing - but I still felt way too anxious and finally went to see a psychiatrist,” he said. “As I started taking medication and doing sessions, I felt that life is too long to [continue to] struggle [and refuse to admit something is wrong]. It’s just a minor imbalance I have in my life, and it hasn’t undermined any part of my personality or made it difficult to be an artist.”

Another important concept that he wanted to portray through Luke and Daniel was the modern phenomenon of incel, a portmanteau of involuntary and celibacy, which refers to mostly young heterosexual men in the United States who believe that relationships are solely about control and sex and become prone to misogyny and racism.

“They don’t understand what it means to be nice. The idea of a nice guy - you have to watch out for that because that tends to mean someone who pretends to be empathetic because they’re trying to manipulate people. So when Daniel impersonating Luke says to Cassie (the girl he likes) ‘I’ve been kind to you, I’ve shown you sympathy…’ that was from very real relationships that bad men have with women.”

Cassie is the hero of the story who is able to rescue Luke from Daniel’s grasp. From her interactions with Luke, she realizes that he is not a bad person who’s pretending to be nice. Rather, he’s a good person who’s been undermined by Daniel. When she recognizes this, she is able to draw out Luke again, although ultimately it is up to him to defeat Daniel.

“Creativity and empathy are the two key words to explain what my film is all about,” Mortimer said. “The film can be overwhelming when you see it for the first time, but the more you watch it, the more you’ll be able to notice the little details I’ve planted there with my cast.”