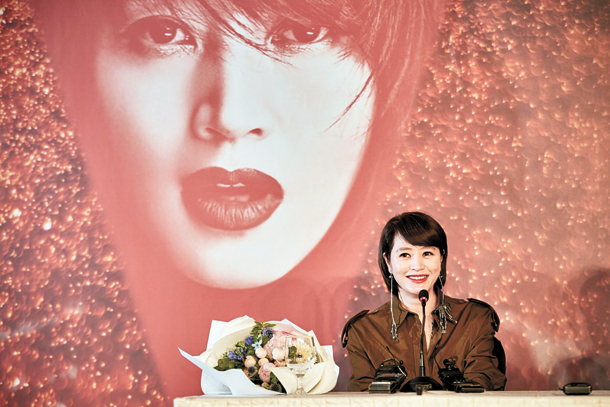 “This special exhibition gave me time to realize how I’ve grown over my 33-year career [as an actor], and I believe [the exhibition] will lend me precious time [to] retrace my footsteps and my work,” actor Kim Hye-soo said at a press conference held at the 23rd Bucheon International Fantastic Festival.

This year, the festival is honoring Kim and her career by showing 10 of the actor’s most iconic and celebrated films in a special section titled “Gorgeous, Charming, Dangerous, Kim Hye-soo.” Kim is the third actor to have the special exhibition their honoring, following Jeon Do-yeon and Jung Woo-sung.

“For me, personally, I was so happy that the organizers suggested the word ‘Charming’ as the exhibition’s keyword,” Kim said.

“I think the word charming is so captivating. As an actor, I truly believe there is no higher praise for me than to be charming. Also, the world I’ve experienced and the perspectives I’ve acquired through acting were charming and important phases for me, so this word was meaningful both on individual and professional level.”

Looking back on her career, Kim admitted that since she started acting from such a young age, she never realized how being an actor impacted her life.

Although there were times when she felt unsatisfied or inadequate about her abilities, she felt that she’s always wanted to push her boundaries until she arrived at a certain “catharsis” as an artist.

Kim also shared her opinion about the overall growth of the film industry and dwindling number of independent films.

“I think over the past few years, big-budget commercial films have been very popular among local moviegoers,” she said.

“At the same time, small, independent films that are enjoyed by a smaller audience are being shunned aside. I think film producers and the audience should put their heads together to resolve the industry’s poor environment [for independent films’ growth].”

At the first floor of the Bucheon City Council building, Gyeonggi, a small exhibition is currently being held where visitors will be able to take a glimpse at the filmography of the actor and props from some of her most famous roles, including the shoes that the actor wore in “The Red Shoes” (2005) and her signature outfit from “The War Of Flower” (2006).

The exhibition will be open until July 7.