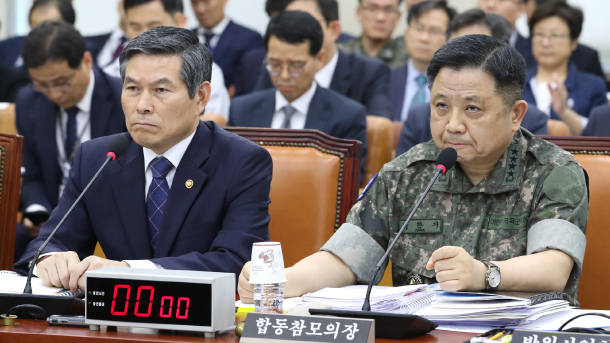 Defense Minister Jeong Kyeong-doo, left, and Park Han-ki, the chairman of the Joint Chiefs of Staff (JCS), attend a parliamentary defense committee meeting at the National Assembly in western Seoul on Wednesday to speak on a North Korean boat which crossed over to the South. [YONHAP]

Following a joint investigation by several branches of the government, the military admitted Wednesday that it failed to guard the inter-Korean border by allowing a North Korean boat to cross into the South and dismissed a general in charge of the patrol mission in punishment.

The Moon Jae-in administration, however, concluded that there were no intentional attempts to lie about what happened, clearing itself from the widespread suspicion of a cover-up.

In a joint press conference, Defense Minister Jeong Kyeong-doo and Choi Byung-hwan, first vice minister of government policy coordination, announced the outcome of an investigation into the recent arrival of a North Korean wooden boat, the military’s failure to detect the incident and suspicions of subsequent lies to conceal the truth.

The National Intelligence Service led a joint investigation with other authorities, while the Ministry of National Defense conducted its own probe. The Coast Guard and the Blue House’s National Security Office also each conducted probes into the suspicions surrounding the infiltration.

The military announced on June 15 that a North Korean fishing boat carrying four people was discovered while adrift due to engine failure near Samcheok Harbor, Gangwon. It was later revealed that the boat actually crossed the eastern Northern Limit Line, the inter-Korean maritime border, on June 12 and freely sailed in South Korean territorial waters for 58 hours until it entered the harbor.

It was also revealed that one of the crew had actually made it to land and asked a passerby at the harbor to borrow a mobile phone. The government became aware of the arrival of the North Koreans only after the resident called the police.

After being questioned, two of the North Koreans were sent back to the North through Panmunjom on June 18. The other two defected to the South.

Defense Minister Jeong on Wednesday issued an apology for the military’s failure to defend the border. When the military first addressed the media on June 15, it insisted that its mission to guard the border had no shortcoming.

“The military failed to detect the boat’s border-crossing, sailing and entering at Samcheok Harbor,” he said. “Furthermore, we failed to give a proper explanation to the public. As the minister of defense, I feel the responsibility and offer an apology.”

He said the ministry’s investigation revealed that the military’s border security had problems.

“Failure in a guard operation is a grave mistake that can never be tolerated,” he said. “We will sternly punish those responsible.”

He still argued that there were no intentional lies about the situation.

“There was no attempt to downplay or conceal the situation,” Jeong said. “But the military assessed the initial situation very naively and failed to give enough and accurate explanations. I offer an apology once again for having failed to properly inform the public on an important national security matter.”

He promised to improve border security by introducing new equipment and conducting routine drills with concerned authorities. Following Jeong’s apology, Choi announced the outcome of the joint investigation led by the National Intelligence Service and released a composite report that cleared the government of a suspected cover-up.

The punishment of military leaders responsible for the lapse was also announced. Lieutenant General Lee Jin-seong, commander of the 8th Corps of the Army, was relieved from his duty.

Joint Chiefs of Staff Chairman Park Han-ki and commanders for land and naval operations were given a warning, while Maj. Gen. Lee Gye-cheol, who leads the Army’s 23rd Infantry Division, and R. Adm. Kim Myeong-soo, commander of the Navy’s First Fleet, were referred to a disciplinary committee.

The government cleared itself from the suspicions that it had attempted to conceal the incident. According to a report released by Choi, the four sailors had initially lied to the Coast Guard that they had adrift, causing the initial misinformation. The probe also concluded that they were all civilians and no evidence of espionage was found.

The investigation concluded that the military acted extremely inappropriately and naively when it told the press in a briefing that its border security operations had no problems, and the officials of the Defense Ministry and Joint Chiefs of Staff all admitted to their wrongdoings.

The National Security Office should have offered a detailed explanation in order to prevent public anxiety and suspicion, but misjudged the situation, Choi said.

“It was confirmed that the president later reproached the officials over this,” he said.

The government also dismissed suspicions that a presidential official attended the Defense Ministry’s briefings to coordinate with them.

The incident took place as the Moon administration purses rapprochement with North Korea. Last year, the defense ministers of the two Koreas signed an agreement to end hostilities and ease tensions at the border. The conservative opposition parties, however, have blamed the reconciliation policy for the military’s slacked discipline and poor readiness.

Following the press conference, Minister Jeong attended the National Assembly’s Defense Committee meeting and briefed lawmakers. The conservative opposition Liberty Korea Party (LKP) said the probes are insufficient and questioned the conclusion that the Blue House was not involved in a cover-up attempt.

Both liberal and conservative opposition lawmakers said the punishment of presidential aides is important, because it could serve as proof that the Blue House is involved in the suspected cover-up.