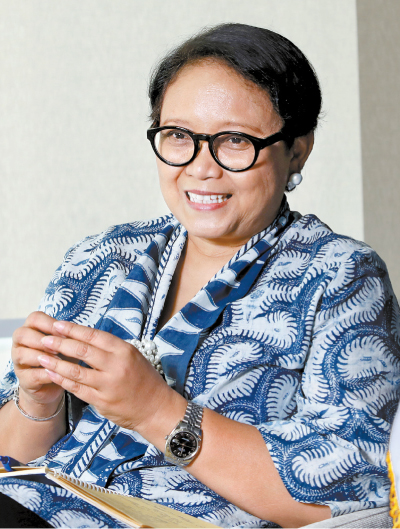 Indonesia’s Foreign Minister Retno Marsudi, one of just over 20 female foreign ministers in the world, including South Korean Foreign Minister Kang Kyung-wha, called for more women in peace talks and peacekeeping during her visit in Seoul on Monday.

“In any conflict or war, women are usually victims,” Minister Marsudi told the Korea JoongAng Daily at the Indonesia Investment Promotion Center in Yeouido, western Seoul, on Monday. “But the potential for women to contribute in resolving the conflict itself is quite huge. Our task is to empower women so that they can protect themselves, their children and resolve conflicts.”

Indonesia has deployed 3,000 peacekeepers around the world, around 100 of whom are women, according to the country’s Foreign Ministry.

“It is only 3 percent as of now, but this has been a significant increase compared to the past and there is steady progress in getting more women involved in peace talks,” Marsudi said. “Still, there is much more to be done, as less than 5.8 percent of the peacekeepers worldwide are women and it has been very challenging to increase the number of female peacekeepers.”

Indonesia is involved in peacekeeping operations in Palestine, Afghanistan and the Rakhine State of Myanmar.

“Women empowerment is a mainstream Indonesian foreign policy,” Marsudi said. “Indonesia was the president of the United Nations [UN] Security Council in May, during which time I chaired two meetings on peacekeeping operations, especially on building the capacity and training of female peacekeepers.

“In particular, we try to contribute to empowering women in Palestine and Afghanistan, as well in more neighboring regions such as in Rakhine State,” she added. “In Rakhine, we are trying to assist Myanmar and Bangladesh to resolve the situation and prepare the voluntary, safe and dignified repatriation [of Rohingyas].”

Minister Marsudi was visiting Korea from Sunday to Tuesday to meet with Foreign Minister Kang to follow up on the Korea-Indonesia summit held on the sidelines of the Group of 20 summit in Osaka, Japan, on Friday, as well as to attend the conference, “Action with Women and Peace: Global Partnership to Combat Sexual Violence in Conflict,” held by Korea’s Foreign Ministry on Tuesday.

The conference was held for the first time in Korea since the ministry established the Action with Women and Peace advisory committee in June last year.

“The ‘Action with Women and Peace’ initiative was launched to increase the ROK government’s contributions in the area of ‘women, peace and security,’” said the ministry in its statement in June 2018. “[The topic] has become a key agenda in the international community since UN Security Council Resolution 1325 was adopted.”

“It has been a pleasure to work with Minister Kang as her government is also focusing on women issues,” Marsudi said. “There are more than 20 female foreign ministers in the world, and we meet yearly on the sidelines of the UN General Assembly meeting in New York to discuss issues related to women empowerment.”

Appointed in 2014, Marsudi is the first female foreign minister of Indonesia. She was previously ambassador of Indonesia to the Netherlands, Norway and Iceland, and also served in the Indonesian Embassy in Canberra, Australia.