The best Major League Baseball (MLB) season of Choi Ji-man’s career will be interrupted by a stint on the injured list (IL). 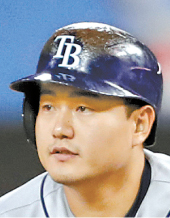 The Korean first baseman for the Tampa Bay Rays was placed on the 10-day IL with a left ankle strain Wednesday (local time). Choi has been hobbled by ankle and groin problems in recent days.

The 28-year-old journeyman is batting .266/.351/.423 in 70 games with nine home runs and 33 RBIs. He has already set a career high in RBIs and is one shy of matching his single-season best in home runs. Choi, who was traded by the Milwaukee Brewers to the Rays last summer, has also established career highs in games played, runs scored (28), hits (64), total bases (102) and walks (30).

The Rays may have decided to give Choi some rest heading into the All-Star break next week because they’re facing four left-handed pitchers in their final five games of the first half. Choi, who bats left-handed, has struggled against southpaws this year, with a .205/.294/.273 line, one home run and three RBIs in 44 at-bats.

If Choi returns to action on July 13 when he becomes eligible, he will only have missed six games, thanks to the All-Star break.

From the Korean contingent of five in MLB this year, Choi is the second player on the IL. Colorado Rockies’ reliever Oh Seung-hwan has been on the IL since June 10, retroactive to June 7, with a left abdominal strain.

Choi signed with the Seattle Mariners out of high school in 2009, but it wasn’t until 2016 that he made his Major League Baseball (MLB) debut - with a different club.