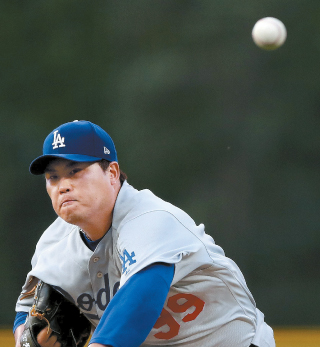 Baseball is a statistician’s dream sport. Not only is every move of the game broken down into minute numerical details, but fans actively follow even the most obscure stats.

This season, Ryu Hyun-jin of the Los Angeles Dodgers is dominating the stats tables.

With the season nearing the halfway point, Ryu leads the entire MLB with a 1.83 ERA, and comes in second for WHIP (walks plus hits per innings pitched) at 0.90. In the National League, he’s ranked No. 1 for ERA and WHIP and has allowed the fewest walks. In the most significant pitching statistics, Ryu has proven that he is No. 1 not just in the National League, but in the entire MLB.

A little further down the table, Ryu’s name regularly crops up among the less important stats. In the National League he comes in at No. 3 for the number of times he has induced a batter into hitting a ground ball for a double play, No. 5 for the number of ground outs, No. 3 for percentage of games won, No. 1 for opposing player on-base percentage - the list goes on.

At the very bottom of the stats table, things get interesting. This is where the ratios are found, statistics that tend to offer an accurate representation of precisely how well a player is handling the mechanics of his position, and where Ryu’s numbers start to look legendary.

In a very basic sense, this, alongside ERA, is the most fundamental pitching statistic.

Ryu is currently on track to record the best K/BB in the history of the Majors.

This season, Ryu has recorded 97 strikeouts with only 7 walks, as of Wednesday, showing a mixture of control and power to keep batters guessing without throwing too many balls. With a K/BB at 13.43, Ryu is currently nearly two points ahead of the all-time record of 11.62, set by Phil Hughes, then of the Minnesota Twins, in 2014.

If Ryu is able to keep up his current form - or at least avoid slipping too much - he has a very good chance of blowing past that record.

All of these achievements came with the caveat, “best Korean.” But Ryu’s stats this season show that he’s not just the best Korean, but one of the best pitchers in the Majors. A spot in the history books for the best K/BB of all time would prove that.

Ryu will be back in action at 10 a.m. this morning, Korean time, as the Dodgers take on the San Diego Padres at Dodger Stadium in Los Angeles.