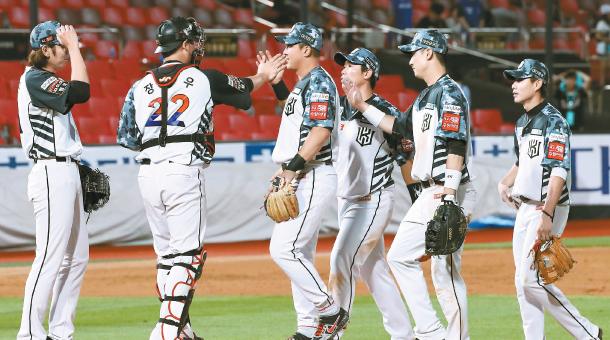 The KT Wiz players celebrate after winning against the NC Dinos at Suwon Baseball Stadium on June 23. [YONHAP]

The KT Wiz are a different team this year.

Playing their fifth season in the KBO, the Wiz are no longer the perennial last-place team. As of Wednesday, the Wiz are on a seven-game winning streak, the longest in the club’s history, and are now only two games behind the NC Dinos, who currently hold the last postseason spot.

Their streak is even more impressive as it has been achieved without one of their star players, Kang Baek-ho.

The Wiz have had to play their entire winning streak without Kang, who recently underwent hand surgery after a freak accident.

Kang was left with a deep cut on his right hand after making a catch in the foul zone. His hand caught on a sharp metal piece that was holding the safety nets in place during a game against the Lotte Giants on June 25 at Sajik Baseball Stadium in Busan.

Due to Kang’s unexpected absence, Cho Young-ho stepped up to the plate. Just like Kang, Cho has been playing as the Wiz’s third batter and right fielder. Although Cho doesn’t have Kang’s slugging ability, he’s shown great contact and an ability to get the job done.

“When there’s Kang Baek-ho, we have depth to our batting lineup,” said the Wiz manager Lee Kang-chul.

“But as Cho Young-ho got in there, we have more strategic options. Our team needs to be strategic to score more [because we don’t have many sluggers].”

Cho has only played in 36 games this season but has a .329 batting average.

Of the two, Yoo is probably one of the hottest players in the league. In Yoo’s last 10 games as of Wednesday, he has hit five home runs and has a .474 batting average. Starting from June 1, Yoo has been assigned as the Wiz’s clean-up hitter in the batting lineup. Although the position can be overwhelming, Yoo has been living up to expectations so far as he had a .337 batting average in 27 games as clean-up.

At 38, Yoo is not only the oldest player on the Wiz’s roster, he is also one of the older in the KBO. Although Kang is a more familiar name, Yoo has been consistently fulfilling his role as a veteran for the young club. Having joined the Wiz in 2016, Yoo has kept his batting average above 0.300 for all four seasons and is now the Wiz’s captain.

Along with Yoo, the Wiz’s third baseman Hwang is also slowly improving. Hwang, playing his second season with the Wiz, got off to a slow start of the season by starting the first month with a .229 batting average with only three home runs and four RBIs in eight games. He made a slight improvement in April with a .267 batting average, but his struggle continued in May as it fell back down to .242.

Due to this, he was excluded from the starting lineup for a few of the Wiz’s games. But, starting in June, Hwang returned to his old form with a .330 batting average for the month.

On the mound, the Wiz manager made an abrupt decision to move rookie Rhee Dae-eun to closer and that is proving to be just what the Wiz needed.

Rhee started the season as a starter but he was moved to the bullpen. Then, once the Wiz’s closer Kim Jae-yoon left the entry due to a shoulder injury, Rhee was given a shot as the closer. Since June, Rhee has been playing as a bullpen pitcher and has a 0.00 ERA, picking up two wins and four saves in nine games.

Lee now intends to keep Rhee as closer for the rest of the season.

“Rhee Dae-eun’s doing very well,” Lee said. “Even when Kim Jae-yoon returns, he will be the set-up man and Rhee will be the closer.”

Starting today, the Wiz will play its weekend series against the ninth-ranked Hanwha Eagles at Daejeon Hanbat Baseball Stadium.

BY KIM SEEK, AN HEE-SOO [kang.yoorim@joongang.co.kr]