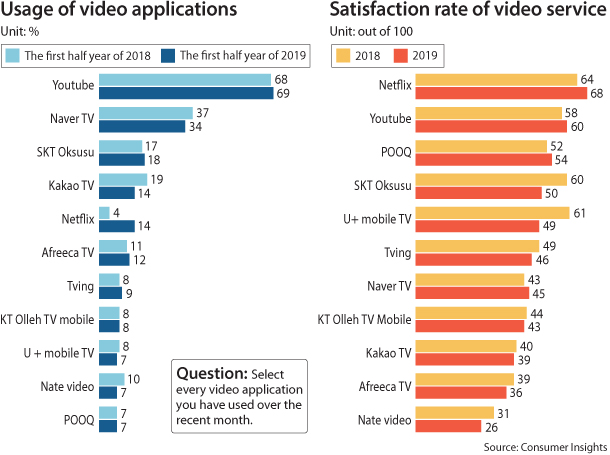 YouTube and Netflix are taking it all, and domestic competitors are looking for ways to survive.

A recent survey shows that in over-the-top (OTT) video - which is distributed via the internet independent of the internet service providers - the leaders are only getting bigger.

The survey asked people to name every video-related application they have used during the month.

YouTube was No. 1, mentioned by 69 percent of people survey.

The domestic competitors did not fare well. Naver TV took second place, at only 34 percent.

And the trend suggests that the international competition is gaining on the local players.

Two Korean-originated services did well, with SKT Oksusu coming in at 18 percent and AfreecaTV at 12 percent. Both increased 1 percentage point from a year earlier.

Regarding how frequently users logged in to a service, YouTube was the clear No. 1. In terms of satisfaction, Netflix dominated. It was in first place, with 68 percent saying they were satisfied in the first half of this year. A year earlier, it was at 64 percent.

Industry analysts say the strength of Netflix is in part due to the fact that it partnered with LG U+ and developed its own local program, such as the Kingdom TV series.

People were less satisfied with YouTube after it introduced its Red premium service. The satisfaction level decreased from 69 percent in 2017 to 58 percent in 2018. This year it recovered around 60 percent.

Among domestic platforms, except for SKT’s Oksusu at 54 percent and POOQ at 50 percent, the satisfaction level of all the companies was stuck under 50 percent.

Lee Hyo-sung, chairman of the Korea Communications Commission, said on June 26 at a meeting with domestic OTT companies, that global companies with huge capital resources were accelerating their acquisition of market share. If this continues, he added, the market will be completely under control of the global companies.

Apple and Walt Disney, both with capital strength and content power, are watching for an opportunity to enter the market in Korea this year. Disney controls libraries familiar to Korean viewers, such as those of Lucasfilm and National Geographic.

It could be as strong as Netflix.

Domestic OTT companies are hoping the government will improve the regulatory environment to help them fight against foreign companies. The content of the domestic providers is scrutinized by domestic regulators, while that of the foreign providers does not face local scrutiny.

“If the government tries to promote Korean OTT as it acknowledges the importance of content in the 5G era, it is important to create an environment where companies could compete under similar conditions,” said an official from the content industry.