[BEHIND THE BEATS] Twenty years in, Verbal Jint is still looking to win

[BEHIND THE BEATS] Twenty years in, Verbal Jint is still looking to win

Some say that Korean hip-hop began in the 1990s with first-generation artists like Seo Taiji and Boys or Deux, while others point to Hong Seo-beom (who went by the name Kim Sat-gat) and his experimental songs in the late ’80s.

Fans of different artists could argue over who bears the rightful crown as the father of Korean rap, but there is one figure who many rappers recognize as the godfather of Korean hip-hop: Verbal Jint.

Rapper and producer, Verbal Jint made his debut in 1999 with “Big Brag” and shaped the local hip-hop scene in two major ways during the 2000s and early 2010s. He is known for popularizing a sophisticated rhyming scheme that fit the Korean language at a time when many rappers struggled to break free from the English-based rhyming structure. At the same time, he is known to have helped young rappers - including some of the most popular acts in hip-hop these days - start their careers.

“I always thought that I wanted to be close to music in my life,” said Verbal Jint in an interview with the Korea JoongAng Daily.

“I was actually in a band before I started rapping. I always wanted to make something - whatever kind it was. Me and the other members didn’t see eye to eye on what kind of music we wanted to make, which is why I quit the band and started making my own music that I could play on my own. I might not have been rapping if that band turned out well.”

Of the musical feats achieved by Verbal Jint, he is best known for his albums “Modern Rhymes EP” (2001) and “Misunderstood” (2008). On “Modern Rhymes,” he rapped using a new rhyming style that didn’t follow the conventional assonant rhyme couplets that are natural to the English language or simple repetition of the same sound.

On songs from “Modern Rhymes” - such as “Radio,” “Drama” or “Overclass” - he removed the chains that had confined rappers and started a new era where rhymes didn’t just have to be in the same place or have the same ending vowels, but existed freely within the flow of the words that could only be heard with the beat, not read with the eyes. 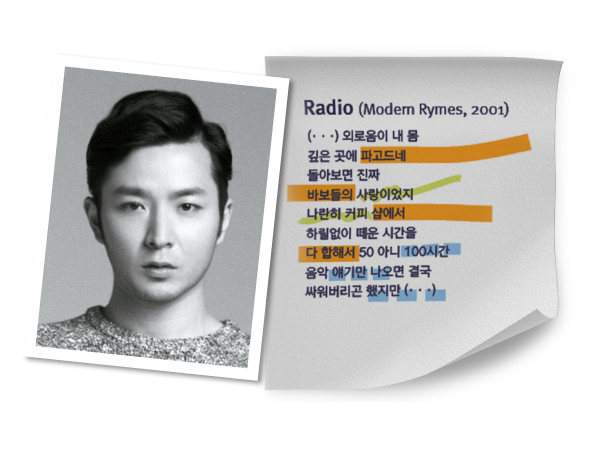 Verbal Jint, left, introduced a new rhyming style to Korean rap with his lyrics. [OTHER SIDE]

“Rhyming takes its roots from Western languages and so it’s easy to have rhymes at the end of each phrase. In Korea, that wasn’t the case. But I thought that it would be fun to bring that into our own lyrics,” he said.

Verbal Jint also helped rookies in the 2000s get their names out into the public at a time when the idea of helping the next generation of artists wasn’t common.

Some of the biggest names in hip-hop today - such as rappers Swings and San E - credited Verbal Jint for having “introduced them to the scene and gave them the chance to stand on stage,” according to Swings. He produced beats for young artists and featured them on his albums.

But even with all of his achievements, Verbal Jint remains humble. “I never had any big ideas or a [specific] goal in my mind. I just made the choices that I could at each moment, and those small decisions were just right at the time. I just did what I saw fit for my taste and my needs,” he said.

Since 2016, Verbal Jint’s work has been focused on self-reflection. On the album cover of 2017’s “No Excuses,” he’s even seen closing his eyes with his hands clasped together in front of his face as if he’s praying. But now, he would like to begin a new chapter in his long 20-year career.

But unlike some of his peers, who go into other ventures outside of music, Verbal Jint plans to stick with what he knows best. He recently bade farewell to his longtime-partner Brandnew Music and founded his own label just for himself and his music called Other Side.

Verbal Jint recently released an album titled “Is It Music or Is It A Report?” in May, his first release from the label he started earlier this year. [OTHER SIDE]

“I have become such a different person than how I was 20 years ago,” Verbal Jint said. “There is a certain character and image that people have of the name Verbal Jint, but I want to take all that apart and start anew. That’s why my new label’s called ‘Other Side,’ because I want to show the other side of myself from now own. I want to be chameleon-like.

“At some point, the rappers that I used to perform with many years ago and I have stopped communicating. They have their own labels and they find new talent. They start businesses and stop being rappers themselves. I don’t want to be like that. I have this need and desire to express myself, and a vision to always be active. I want to be free,” said Verbal Jint.

He added, “Everything has changed so much and so quickly, and now hip-hop has become a part of the culture for young people. We used to dream that hip-hop would become that popular. And now, we’re living in what I hoped would happen: I’m living my dreams.”