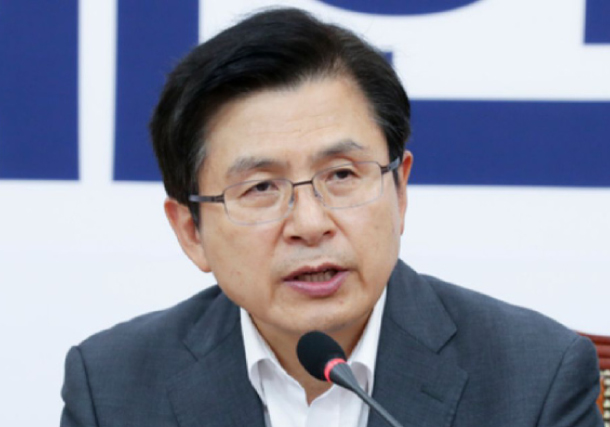 Hwang Kyo-ahn, former prime minister and chairman of the main opposition Liberty Korea Party, speaks at a meeting of senior lawmakers at the National Assembly in Yeouido, western Seoul on Wednesday. [LIM HYUN-DONG]

“This is Hwang Kyo-ahn.”

His name was on the caller ID on my smartphone and it did sound like him, but something felt weird. Why was the former prime minister calling me 10 minutes after meeting me?

I visited the chairman of the main opposition Liberty Korea Party in his office in early May. I managed to arrange the meeting after begging the public relations office. I wanted to complain about the rough words of a party official.

Usually, politicians react in one of two ways. I may be rebuked for bringing up something that is not important or they promise to scold the official.
In both cases, nothing actually happens.

So I had low expectations. Hwang didn’t say much and the meeting didn’t last five minutes. As I was leaving the office, I told myself that at least I had said what I wanted to. Then I got a call 10 minutes later, and I wondered if I had made a mistake.

On the phone, the chairman said, “I talked to the person in question.” I was slightly moved.

When Hwang took the party leadership, I didn’t see people around him turning on him. I heard ridiculous praise like “He even uses honorifics to those under him.” What impressed me was that unlike other politicians, he kept his word. After the experience, I thought it could be his weapon as a newbie in politics.

But perhaps because of that whimsical sentiment, people have different opinions on Hwang’s supposedly clean-cut, earnest character. Many find him frustrating and stuffy. He imprudently commented on migrant workers and talked about how his son got a job without a qualifying resume. While other politicians would smoothly move on, he makes more excuses and blows up the situation.

Hwang often tells the party’s secretariat not to make him idle. He is nervous if he does not have something to do. Politics is the art of creating something from nothing. Instead of looking for obvious answers, Hwang needs to create problems himself and prove his raison d’être.