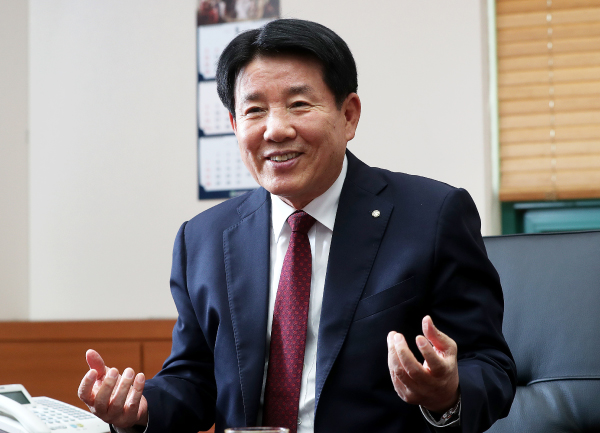 Lee Jung-hee, Chairman of the board at the Korea Pharmaceutical and Bio-Pharma Manufacturers Association and CEO of Yuhan Corporation [JANG JIN-YOUNG]

In a recent ceremony, the government declared that it would promote the bio and health industry by increasing research and development (R&D) investment from 2.6 trillion won ($2.23 billion) to 4 trillion won by 2025. Lee Jung-hee, a pioneer in “open innovation,” in which a new drug is developed by cooperating with start-ups, has a lot to say about the government’s new goal.

First and foremost, he says a slogan to promote the industry should be decided upon by direct action. He emphasized that a large part of R&D investment should go to start-ups to develop new drugs. He also added that the number of examiners who evaluate medicines in advance should be increased. Yet he pointed out that because of the 52-hour workweek, researchers have less time to develop new innovative drugs. The JoongAng Ilbo met Lee, the board chair of Korea Pharmaceutical and Bio-Pharma Manufacturers Association, as well as the representative director CEO and president of pharmaceutical company Yuhan, and listened to his advice.

Q. Korea has big names in most businesses except for the pharmaceutical and bio industry. Why is this?

A. There are basically two reasons. First of all, Korea did not try to create innovative medicines on its own. Rather, Korea imported medicine created by foreign companies and sold them or created generic drugs that copied off-patent medicines. Additionally, the government didn’t consider this field as an industry; relating this field to people’s health, the government only considered the field as part of its welfare policy.

Why did the government not consider this field as part of industry?

It takes 10 to 15 years to develop a single new medicine, and the process continuously costs money. For a long time, nothing tangible comes out. I think the government, which promotes industry, paid more attention to fields that progress quickly. Yet the size of the semiconductor market in the world is 500 trillion won ($427.5 billion) a year, and the pharmaceutical and bio industry amounts to 1,400 trillion won.

Hanmi Pharmaceutical’s export of huge technologies in 2015 was the impetus. [At that time, Hanmi Pharmaceutical signed a total of seven export contracts on technology that amounted to 4 trillion won.] This gave confidence to the industry as a whole. As the head of Yuhan, I actually also felt devastated. I thought that “the rival jumped all the way here by investing for a long time, but where are we?”

Although progress is made in exporting technology, global companies far outweigh domestic companies. The R&D investment size is hard to even compare.

That’s why we chose open innovation. Not a single company, but instead, several companies cooperate and develop new medicine. Korea, especially, has pre-eminent pharmaceutical and bio start-ups. Last year, Yuhan exported lazertinib — a therapeutic agent for lung cancer — at 1.45 trillion won, and it was developed by cooperating with a start-up. At first, the industry was surprised to see a company without an accumulated technology to export technology. Now most of the companies participate in open innovation.

Even with open innovation, domestic companies only export technologies. It’s unprecedented to develop and sell a blockbuster-level innovative drug from start to finish. We still lack finance; to take charge of development of a new drug from start to finish takes 10 to 15 years, and costs over 1 trillion won. We can’t handle it for the time being. That’s why we export technology to global pharmaceutical companies in the middle stage. After five years, we predict that an innovative drug will be released in Korea as well.

While export of new drug technology was on the news, the Invossa incident suddenly came in. [Invossa is Kolon Life Science’s gene medicine to cure osteoarthritis. It was developed by using human cartilage cells, but the drug was found to use kidney cells, so its licence was canceled.]

When the pharmaceutical and bio industry started to sharply rise, an unfavorable incident took place. It’s truly sad. But isn’t it right to keep on accelerating the path that we chose to go?

In May, the government opened a ceremony to declare its vision as a bio and health country. President Moon Jae-in was present at the event.

The event should not end as an event. If the president said like that, then, the process should be like that. I do not know how it will progress, but seeing the precedent until now, I don’t trust it that much.

Do you think it will also end like an event this time?

I can at least feel the determination. Last month, a CEO meeting was held. In the meeting, ministers of the Health and Welfare Ministry, the Science and ICT Ministry, the Trade, Industry and Energy Ministry, as well as the head of Ministry of Food and Drug Safety, the assistant secretary of the Ministry of Strategy and Finance were present. A joint meeting of ministers is very rare.

A strategy for invocation in the bio and health industry was also released.

I don’t feel it in my bones. To feel it in real life, I hope there is a detailed action plan.

The government said it will raise R&D investment to 4 trillion won. Isn’t this specific enough?

Where and how the money will be used is not clear. A big part of the 4 trillion won — at least 1 trillion won — should go to start-ups. Data is also the problem. Korean hospitals own tremendous amount of data. For instance, the data tells what kind of change occurs when injecting a certain medicine.

That data should be allowed to be used in the development of new drugs, but the data is concealed. This is done to protect individuals’s information. If the information of the person is hidden, there would be no problems, and the government should lift these regulations.

Is there anything missing in the governmental innovative strategy?

There are many technologies developed by universities and research centers with the support of the government. Yet pharmaceutical and bio companies are unaware of what kind of technology exists. In early June, Yuhan signed a memorandum of understanding (MOU) with Sungkyunkwan University. The MOU was about the technology developed by professors. It was about a technology capable of better injecting drugs into the brain, and a technology related to filming the brain. I knew it accidentally. If the government creates a data base on technology and allows companies to easily search them, the usage will be far greater. When coming up with a bio strategy, I also want the government to distinguish the biosimilar companies that make generic drugs from companies that make innovative drugs. I think now the government considers both of them just bio companies. It is deluding itself that the biosimilar companies are innovative drug companies. What is more, I want the government to boldly reduce the tax on clinical test investment.

Korea is famous for taking a long time to get a new drug permitted.

Ministry of Food and Drug Safety lacks a labor force. The workers who evaluate medicine are one-tenth those in the United States. Even though the examiners work hard, there is a limit.