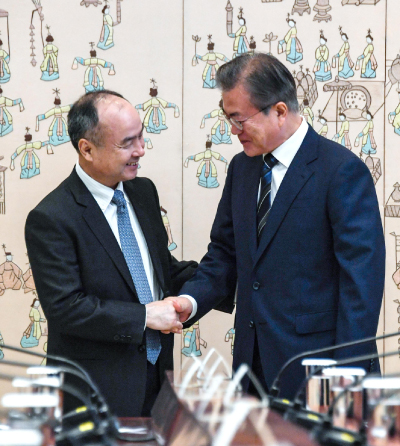 President Moon Jae-in, right, greets SoftBank CEO Masayoshi Son, an ethnic Korean from Japan, at the Blue House in central Seoul on Thursday ahead of a meeting to discuss innovative growth. Blue House spokeswoman Ko Min-jung said in a statement that Son advised Korea to focus on artificial intelligence (AI) and create a strategy to make practical use of the technology. Because Korea had a slow start in AI development, Son said the country needed to take “a bold approach” to catch up with other countries instead of taking little steps. The Japanese CEO continued that he would “help the world invest in Korea’s AI” industry, adding that the fastest way for Korea to become the leading AI country would be for it to invest in the world’s leading AI company. Son was believed to have dinner with several Korean business leaders on Thursday evening, including Samsung Electronics Vice Chairman Lee Jae-yong and Hyundai Motor Group Executive Vice Chairman Euisun Chung. [YONHAP]