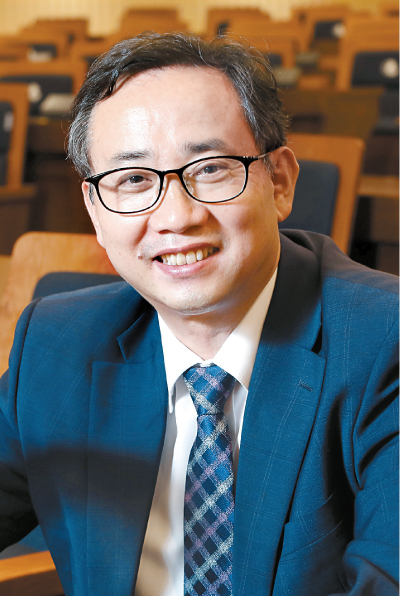 Han Won-dug, dean of the Hankuk University of Foreign Studies Graduate School of Interpretation and Translation, saw his alma mater rise to the best Korean graduate school of interpretation and translation. Now he’s aiming for higher goals as the school celebrates its 40th anniversary this year. [PARK SANG-MOON]

When Han Won-dug decided to study Spanish at Hankuk University of Foreign Studies Graduate School of Interpretation and Translation (GSIT) more than 30 years ago, everyone doubted he could ever make a living as an interpreter. The Spanish language was barely known in Korea.

It wasn’t long before Han proved them wrong.

Since 1994, Han has translated for Korean presidents in their summits with 18 Latin American countries, making him one of the best Korean-Spanish interpreters Korea has ever had.

This year, Han is taking on a new challenge as the dean of his alma mater as the school marks its 40th anniversary.

GSIT will join hands with the Korean Association of Translators and Interpreters to host the 9th Asia-Pacific Translators and Interpreters Forum on the school’s campus in Dongdaemun District, central Seoul. The forum, which starts today and lasts through Sunday, is expected to touch on the future of the global translation and interpreting profession amid advancements in artificial intelligence (AI) and language learning, with over 200 interpreters from all parts of Asia participating.

The Korea JoongAng Daily recently sat down with Han at his office to hear how GSIT is training the next generation of interpreters.

Q. What was GSIT’s greatest achievement over the past four decades?

A. Nearly every interpreter translating for the Korean president is one of our alumni. Lee Yun-hyang, chief of the U.S. State Department’s interpreting services division, who has translated for all of U.S. President Donald Trump’s summits with North Korean leader Kim Jong-un, also graduated from GSIT. So we did a pretty good job at training globally top-tier interpreters and translators. In the past, Korean presidents used to have diplomats or ambassadors translate for them, but that changed as our graduates started taking on that task based on the skill sets they honed at GSIT.

How is the interpretation industry different from now and the time you attended GSIT nearly 30 years ago?

There are a lot more industries for interpreters to be engaged in and provide their services, like pharmaceuticals, welfare, information technology and the fourth industrial revolution, to name a few.

I get that question a lot. Well, it’s a very extreme scenario to imagine, but I think in the end, interpreters will have to learn how to go along with AI. I think AI will certainly handle simple, automated tasks that don’t require human emotions, such as being the M.C. at an event. But one thing AI can’t do that interpreters can is understand people’s relationships. Without knowing the history and nuance of the relationship between two people they’re translating for, interpreters can’t provide accurate translations, and I think that’s what sets them apart from AI.

What makes a good interpreter or translator, and how does GSIT train its students to become that kind of person?

You have to have a lot of passion for learning, and it can’t be something short term. When I first said I wanted to be an interpreter, everyone around me was like, “Can you really make a living out of that?” It took me a long time to get here. So to enable our students to learn beyond the books and look to the future, we often take them to forums with various themes because such professional gatherings are all about talking about what’s yet to come.

What’s GSIT’s goal for the next 40 years?

Second, the country needs to manage data or services publicly provided by interpreters. Such information could come in handy when interpreters and government officials prepare for summits because they can reference conversations shared in previous meetings. Then interpreters would know in advance how to translate certain words or what to watch out for because summits can easily fall apart with small mistakes if a president deems that the other side is unwilling to cooperate. And based on what they learn from that data, interpreters can advise the Korean president on what to be careful about saying based on the cultural implications of that other country’s language. The sad part about this is that Blue House interpreters often get replaced when a new president enters the office, which I also think is caused by the lack of a system. The problem with this is that the Blue House, in turn, is unable to accumulate interpretation know-how.