There’s still about a month left until NC Dinos catcher Kim Tae-gun gets discharged from the military, but his return is already making headlines in the KBO.

The Dinos aren’t the only team patiently waiting for Kim to come back. The catcher, who is currently fulfilling his military service with the Police Baseball Team in the Futures League, has the attention of all 10 teams as he will become a Free Agent (FA) at the end of this season.
Kim hasn’t let the attention go to his head. 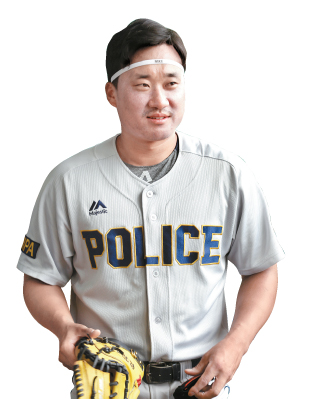 “It’s definitely great [to get discharged],” he said. “But I’m not excited yet.”

Kim made his KBO debut with the LG Twins in 2008 after graduating from Busan High School. He moved to the Dinos in 2012 as the team was promoted to the KBO.

It’s never the best feeling to get traded or to switch to a different team, but Kim’s move to the Dinos proved to be the right decision. He didn’t have any standout skills but his clean defense and his ability to lead the pitchers quickly caught the attention of the Dinos’ former manager, Kim Kyung-moon, who also played as a catcher.

Once the 2017 season ended, Kim left for the Police Baseball Team to fulfill his military service. Despite being an older player on the Police Team, Kim took the opportunity to keep playing very seriously.

“Some people think that being able play in baseball games while in the military is a privilege,” Kim said. “I feel thankful [for that]. The players on the Police Baseball Team feel a sense of pride that they are trying their hardest in balancing baseball while fulfilling their duty just like any other soldier.”

By looking at his statistics in the Futures League, Kim is proving that he didn’t waste his two seasons with the Police Team. Throughout the 2018 season, Kim had a .320 batting average with eight home runs and 35 RBIs. This season, he’s had a .356 batting average but doesn’t have a home run.

Not only has Kim managed to stay in shape while in the military, he also has the somewhat dubious honor of being on the last-ever Police Baseball Team squad.

The Police Baseball Team only has one game remaining, on July 10, against the Hanwha Eagles Futures League team. Once Kim and the current members of the team complete their military duty and get discharged on August, the team will officially be disbanded.

“Not only baseball, but since we also live together here, I have a lot of attachment,” Kim said. “I think it’ll feel really weird during our last game. There are a lot of veteran catchers like Yang Eui-ji [of the Dinos] and Choi Jae-hoon [of the Eagles], who have gone through the Police Team and have become successful. I joined the military later, but I still feel a responsibility that I have to play well.”

Once the Police Team’s final game is over, Kim will head to Changwon, the home of the Dinos. He plans on using up all his vacation days, which he has saved up, to train with the Dinos’ players.

“I’ve talked with manager Lee Dong-wook and with the club,” Kim said. “I’m trying to join the roster as quickly as possible after I get discharged.”

The Dinos have struggled without Kim. During the first season without him in 2018, they finished at the bottom of the standing for the first time since joining the KBO. This was also only the second time, since their first year in 2013, that the Dinos failed to advance to the postseason.
But Kim’s spot has been filled in his absence. In an attempt to stop the losses, the Dinos signed a big FA contract with Yang, generally considered to be the best catcher in the KBO, last year. The Dinos also signed foreign catcher Christian Bethancourt, but released him earlier this week.

Kim is expected to join the roster and split starting catcher duties with Yang when he returns.

Working with Yang isn’t going to be much of a problem. Back in 2017, they both played for Korea at the World Baseball Classic. Also, for Kim, being in the same team as Yang is a big deal — Yang is his role model.

Yang also found his stride after fulfilling his military duty with the Police Baseball Team and ahead of this season he signed a big four-year FA contract at 12.5 billion won ($10.7 million), the highest contract ever for a catcher.

If Kim plays in 38 games with the Dinos this season, he will earn his FA status. Since he doesn’t have an agent yet, he is receiving a lot of calls from hopeful representatives as he is expected to be a big FA player once the season ends. However, for now, Kim is only focused on doing his best with the Police Baseball Team.

“Until I get discharged, I have to try my hardest as a Police Baseball Team player,” Kim said. “I’ll think of future plans later.”