Shining a light on solar power

Shining a light on solar power 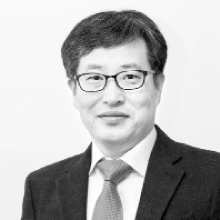 An investigative program on KBS that exposed the problems caused by the proliferation of solar panels has irked the Blue House, which has been persistently promoting renewable energy sources.

The presidential office has been particularly upset by an interview with Choi Kyu-sung, former president of the Korea Rural Community Corporation (KRCC). On the program, Choi said, “The vice minister at first agreed to up the 10-percent cap on reservoir use for solar panel installation to 30 percent, then after the president applauded a scene where panels covered 60 percent of an area, he removed the cap.”

Choi, a former lawmaker of the ruling Democratic Party, became the head of the KRCC in February last year. Upon taking office, he vowed to use offshore reservoirs for electricity generation by installing solar panels on reservoirs under state ownership and raising the power generating capacity from those reservoirs to 4,280 megawatts by 2023 from the current 61 megawatts. The capacity is equivalent to the power generation from four nuclear reactors. In the process, an administrative regulation restricting panel installation to 10 percent of reservoir surface was removed.

The Blue House denied the president had anything to do with the project. Yoon Do-han, a presidential secretary in charge of public communication, demanded an apology from KBS for misrepresenting the government’s energy policy as if it was true.

So who’s lying? In a ceremony at Saemangeum — reclaimed land along the southern coast of Gunsan, North Jeolla — in October last year, President Moon Jae-in declared the vast area would turn into the center of renewable energy sourcing by building massive solar panels and windmills. The ceremony was held near a sea of 50,000 panels covering 220,000 square meters (22 hectares) over a 370,000-square-meter offshore reservoir. That is nearly 60 percent. The president looked over the vast sea of panels with awe. He could have clapped with enthusiasm. 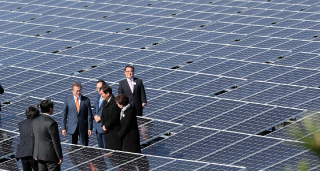 President Moon Jae-in, center, tours a vast area of solar panels on a reclaimed land in North Jeolla after declaring his vision for the Saemangeum Renewable Energy Plant on Oct. 30, 2018. [JOINT PRESS CORPS]

Choi’s comment may not be entirely true because the rural community agency axed the panel regulation before the president’s visit to the site in Gunsan. Choi could have been confused or have exaggerated. Also, there can be a difference between reservoirs for flood control and reservoirs for irrigation. If that’s the case, the Blue House could have explained in a more logical way rather than hit the ceiling.

The government has proclaimed it would raise renewable energy’s share of the power supply to 20 percent by 2030. Solar panels, particularly on the surface of the water, would be the primary driver in the campaign. But the Blue House has strangely overreacted. It was obvious that the president had a penchant for solar panels to embody his campaign promise to phase out of nuclear reactors.

The controversy has triggered a tense standoff between the Blue House and a news organization. The Blue House is trying to cover up or downplay questions about the government’s energy policy. Since Choi was replaced, the rural community corporation lowered its goal of installing water panels by 10 percent. Its solar panel expansion plan turned out to be unproductive and reckless. Solar panels have caused damage and problems all across the country. They have penetrated into mountains, fields and sea, causing an eyesore and environmental problems in natural settings. Farmers and fishermen have been protesting against ruining their livelihoods.

No one doubts the necessity of green energy. But determining if it really fits the Korean ecosystem requires further study. If it is pursued recklessly, it could unsettle the country’s energy security.

The government’s relentless drive for solar power has spiked various rumors about potential collusion among stakeholders to grab the massive government-subsidized projects. The media has a duty to point it out. The Blue House reaction only aggravates questions over whether the presidential office has something to hide.