Koreans in their 40s quickly adapt to automated society

Koreans in their 40s quickly adapt to automated society 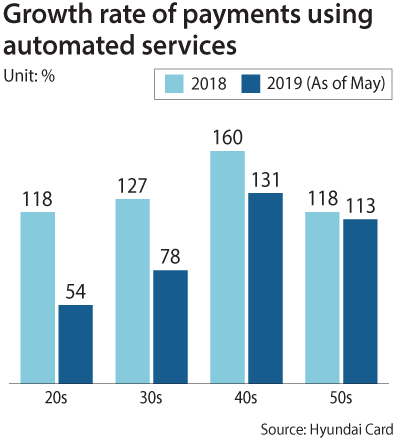 A growing number of middle-aged Koreans have started to adopt high-tech solutions to everyday life, embracing the automated systems that have become common across the country in recent years.

Those in their 40s showed the highest increase in payments made using digitalized services such as delivery and ride-hailing apps and self-service kiosks, according to research released by Hyundai Card on Thursday.

Payments by people in their 40s jumped up 131 percent between January and May this year compared to the same period last year. Last year, the growth rate was 160 percent on year.

The jump was the biggest among people in their 40s, suggesting that the age group is quickly catching up with younger users who are often thought to be more tech-savvy.

“While those in their 20s and 30s grow the automated market without the need for direct human contact, people in their 40s quickly enter the segment in a way that spreads the use to all age groups,” read the study that surveyed a total of 1,000 people between January 2017 and May this year.

As automated payments and mobile ordering have been around for a few years already, the growth rate for people in their 20s and 30s - typically early adopters - has slowed.

Payments by people in their 20s increased 54 percent in the first five months this on year, while those in their 30s showed a 78-percent rise.

In the study by the Hana Institute of Finance released Friday, 26.9 percent of respondents in their 40s selected their smartphone as the primary means of exchanging currency. The ratio is the highest compared to all other age groups, followed by users in their 20s at 23.7 percent.

The institute noted that the number of currency exchange transactions at brick-and-mortar branches of KEB Hana Bank reduced by 4.5 percent in 2018 over a year ago.

The report also explored transfer and investment trends in Korea.

Malaysia came in second at 24.9 percent and Vietnam at 21.6 percent.

Hana Institute of Finance said one of the biggest reasons Koreans have been increasing their investments in Southeast Asia is largely because it costs less to purchase real estate there than in advanced economies like the United States.