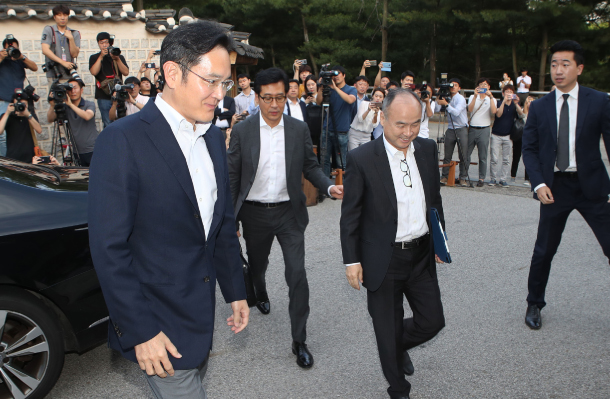 The meeting, which was planned to last an hour, continued for around 150 minutes starting at 7 p.m. in Seongbuk-dong, central Seoul.

Before the dinner meeting, Lee privately met with Son for around 30 minutes as they rode together to the venue.

With the business leaders, Son reportedly shared his opinions on the latest technology like Internet of Things (IoT), artificial intelligence (AI), 5G and autonomous driving.

Son also stressed the need for Korea to invest aggressively in the AI sector during a meeting with President Moon Jae-in held on the same day.

The meeting between Son and the business leaders took place on the day that Japan’s export restrictions on Korea took effect. Japan on Monday announced it would restrict the export of three key materials - fluorinated polyimide, hydrogen fluoride, photoresists - that are essential to making semiconductors and displays.

The decision is seen as a retaliation for Korean Supreme Court rulings awarding damages to Korean victims of forced labor during Japan’s 1910-45 colonial rule.

Son refused to answer questions related to the political relationship between Korea and Japan. He said he doesn’t know about politics when asked about Korea-Japan relations and what firms can do to enhance the ties.

When asked whether he gave advice to business leaders on Japan’s export restrictions, Son said, “Yes, we talked a lot about it.”

In regard to his plan to cooperate with Korean businesses in the AI sector, Son answered, “Yes.” Son also hinted at the possibility of investing in local businesses within this year.

Korean conglomerates are hoping to build a good relationship with Son, as he has previously made large investments in global technology and mobility companies like Grab and Uber through the SoftBank Vision Fund, the world’s largest tech investor that operates a $100-billion investment fund.

In Korea, Coupang received a $2-billion investment from the SoftBank Vision Fund in November, which has accelerated its development.