Professor devotes herself to helping adoptees

Professor devotes herself to helping adoptees

Park Kyung-min, 63, a professor at Keimyung University’s College of Nursing in Daegu, has been helping Koreans adopted by people overseas find their biological families in Korea for 18 years. 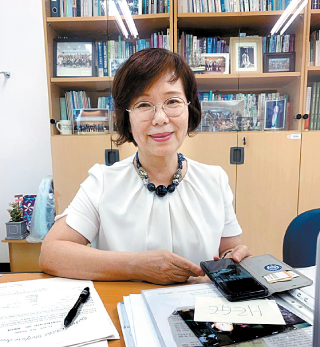 Park Kyung-min a professor at Keimyung University’s College of Nursing in Daegu, talks about the Korean adoptees she has helped in her office. [KIM YOUN-HO]

“I found out there were adoptees among exchange students from the United States and Germany and helped them find their families,” said Park. “This soon led to other adoptees from Norway and Sweden calling me or visiting me. I would offer meals and a room at my own house and we would find their families together.”

Park has reunited six Korean adoptees with their birth families and is currently helping nine others who live around the world.

Park said she thought of helping Korean adoptees reunite with their biological families in 2000, when she went to the United States as a graduate student. She was invited to a party hosted by a former British actor, whose son and daughter-in-law brought their two adopted Korean children.

“When I saw the children, I felt good for them since they were adopted in a rich country and to a rich family,” said Park. “But a friend told me of their sadness, living in a different culture and far away from their family. I was surprised when I heard they are affected [culturally] by things like their different skin color when they grow older.”

Park promised herself that she would help Korean adoptees find their biological families. She got her chance in 2001.

At the time, a young woman who was adopted by an American family when she was 10 months old came to Keimyung as an exchange student. With nothing but her drive and spirit, Park reunited the student with her biological father. This soon led to a long journey as a “Korean mom,” a nickname given to Park by one of the Korean adoptees she is helping.

Park said she does not have a secret method for finding long-lost families. She asks adoptees to write down their stories and she translates them. Then, she sends the stories to newspapers and goes to local government offices and police stations for help. Any information on a certain hospital or orphanage takes Park to the spot.

Once, Park reunited a woman who was adopted by an American family with her biological family with only two pieces of evidence — the adoptee being a twin and coming from Busan. After doing the math, Park estimated how old her parents would be and went to the police. After calling people and facilities over 100 times, Park finally reunited the young woman with her father and twin sister.

“Each of these people led to another and these relationships kept growing,” said Park.

Park always leaves a room at her home in Jung District, Daegu, empty for any Korean adoptees who come to her for help. Park told the Korea JoongAng Daily that she not only offers them a place to stay but also introduces these adoptees to Korean culture. After a long day of looking for their family based on keywords, documents and memories, Park takes these people out for a taste of local cuisine or a relaxing bath at a Korean sauna.

Park said she especially wants to help two people who have been looking for their biological families for more than a decade: Viveka and Tom.

Viveka, whose Korean name is Gong Jae-ok, 39, was born on May 2, 1980. A week later, she was abandoned at a train station in Busan. She was sent to an orphanage by police and was adopted by a family in Sweden.

Tom, whose Korean name is Lee Jeong-sik, 38, was adopted by a family in the United States. Lee was born on June 6, 1981, and his documents indicate that he had lived in Jinwon-myeon, Jangseong, South Jeolla. He was sent to the Holt International Children’s Services when his father enlisted in the military when he was 1 month old.

Park has been helping Gong since 2003 and Lee since 2002. They now have children of their own and are still searching for their birth families. Park has a few years left until her retirement, but she is willing to keep helping adoptees. Yet she finds it harder to help them as she grows older.

“I would like to work with young people, for them to join me in a volunteer group after I retire,” said Park. “I want to create a system of reuniting adoptees to foreign countries with their [birth] families by making such a group.”