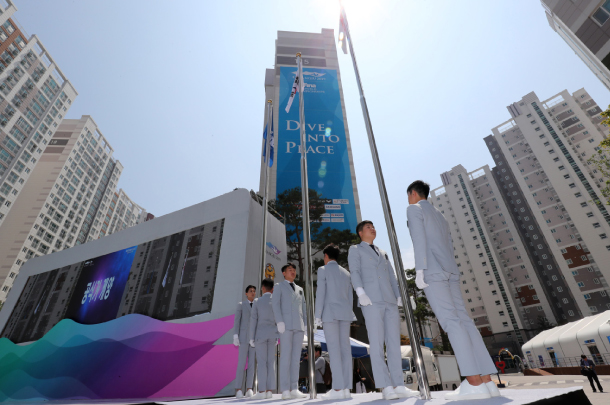 A ceremony to open the athletes’ village for the 18th FINA World Championships in Gwangju on Friday. [YONHAP]

The ruling Democratic Party (DP) on Friday voiced hope that North Korea could send athletes to the upcoming international swimming championships to be held in South Korea to help bring peace to the Korean Peninsula.

Amid an impasse in inter-Korean ties, North Korea has yet to respond to an invitation to take part in the 2019 FINA World Aquatics Championships to be held in the southwestern cities of Gwangju and Yeosu from next Friday to July 28.

“South Korea has completed preparations to enable North Korea to participate in the competition even if the North expresses its intent to send athletes on the eve of its opening,” Lee said at a meeting with senior party members in the athletes’ village for the swimming competition in Gwangju.

South Korea experienced the sports-driven rapprochement on the Korean Peninsula in early 2018, with North Korea’s participation in the PyeongChang Winter Olympics.

Rep. Sul Hoon of the DP said he wants to witness the repetition of eye-catching dramatic moments with the North’s participation in the swimming championships, as shown by the latest meeting by the leaders of the two Koreas and the United States at the inter-Korean border.

“In the past, North Korea expressed its intent to take part in [sports events] just days before the openings. I hope the Gwangju city government and the event’s organizer will encourage the North to join the championships until the last moment,” he noted.