Military investigating ex-soldier who planned to join IS

Military investigating ex-soldier who planned to join IS 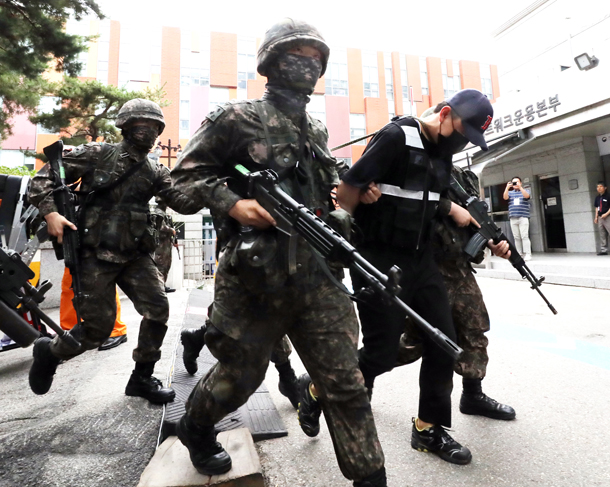 Soldiers conduct an anti-terrorism drill simulating a response to an explosion and attack on communication networks in Jongno District, central Seoul, on Wednesday. [YONHAP]

A 23-year-old man is being investigated by military prosecutors on charges of stealing detonation devices while he was serving the military and planning to join the international terrorist group Islamic State (IS) to carry out a terrorist attack, the Ministry of National Defense said Thursday.

The man, surnamed Park, was arrested recently on charges of violating the Act on Counter-Terrorism for the Protection of Citizens and Public Security and stealing military supplies, the Defense Ministry said. The suspect was handed over to the military prosecution for further questioning on Monday.

He is no longer in the military, as he completed his mandatory military service as of Tuesday, the ministry said. The military and police are conducting a joint investigation into the case.

If the investigators confirm the charges and decide to indict him, Park will become the first homegrown “lone wolf” uncovered since the country introduced the anti-terrorism act in 2016.

According to the ministry, the suspect had collected data and video files on terrorist activities involving IS for years. He started collecting the information in 2016 and joined the Army in October 2017. The data collection continued while he was on active duty.

He was assigned to a unit in the capital region and received special training to become an explosive specialist at the Army Engineer School. During his training, he was suspected of stealing the military explosive detonation devices.

The investigators suspect he stole the devices to carry out a terrorist attack.

In Park’s mobile phone, video files on creating homemade bombs were discovered. A machete, often used by IS members, was also found at his home.

According to sources familiar with the investigation, the suspect installed a secret communication application used by IS members and supporters, and received an email from a suspected IS member.

He was also accused of prompting and encouraging online activities of IS.

According to the ministry, the police started the probe based on intelligence offered by the U.S. FBI in 2017. The initial investigation showed that Park was a soldier and the police notified the military.

“The soldier was handed over to the military prosecution on Monday with a recommendation of an indictment on charges of stealing a military supply item and joining IS,” said an official of the Defense Ministry.

As his service period ended on Tuesday, the suspect is now civilian. The military prosecution will continue to investigate and indict the suspect on the charge of stealing a military supply item because the court martial has jurisdiction over the case.

Other charges of joining and conspiring with a terrorist group, planning an attack and prompting terrorism will be further investigated by the prosecution.

In December last year, a Syrian national staying in Korea for humanitarian reasons was convicted of violating the anti-terrorism law by inciting the public to join IS. He was sentenced to three years in prison.

The man, who worked at a junkyard in Pyeongtaek, Gyeonggi, came to Korea 11 years ago and applied for asylum. Although the government refused to give him refugee status, he was granted a humanitarian stay permit and traveled between Korea and Syria.

The case was the first conviction based on the Act on Counter-Terrorism for the Protection of Citizens and Public Security.

Koreans were occasionally investigated on charges of their attempts to join IS. In 2015, a teenage boy entered Syria through Turkey to join IS. In 2015 and 2016, the government revoked the passports of three Koreans who were suspected of joining IS.