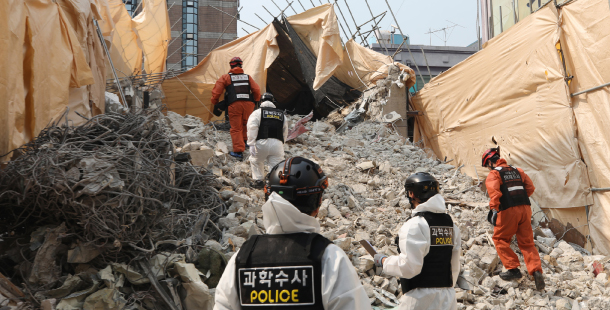 Police officers and firefighters on Friday inspect the site where a building being demolished near Sinsa Station in Jamwon-dong, Seocho District, southern Seoul, collapsed on Thursday, killing one person and injuring three others. [NEWS1]

A building being demolished near Sinsa Station in southern Seoul collapsed onto a road on Thursday afternoon, killing one person and injuring three others.

The wall and the poles fell on three vehicles on the road at the time.

Inside one vehicle were two women in their 60s. They were removed from their vehicle by passersby before authorities got to the scene. The two women sustained minor injuries and were hospitalized and treated.

In another vehicle was a couple, a 29-year-old woman surnamed Lee and a 31-year-old man surnamed Hwang. The woman died and the man was seriously injured.

They were reportedly on their way to pick up their wedding ring. The two were said to be planning to marry next February.

It took firefighters more than four hours to retrieve the couple from the ruins of the building. They rescued Hwang around 5:59 p.m. and transported him to a nearby hospital. He is said to have sustained a serious injury.

Lee’s body was retrieved around 6:33 p.m., according to authorities.

“We had a doctor on site who treated her immediately but she was pronounced dead around 6:35 p.m.,” said the firefighter.

Authorities are investigating why the building collapsed.

The building, built in 1996, is undergoing demolition from June 29 through July 10, and a new building is planned to be built in its place. It was about halfway demolished on Thursday. Construction workers were working on demolishing the basement floor when one of the external walls of the building collapsed, according to authorities.

“Building managers need to submit a request to demolish a building to the district office and need to win approval before they can start demolition work,” Ha Hyun-seok, head of the city management bureau of the Seoul Metropolitan Government told the JoongAng Ilbo over the phone on Friday. “The Seocho District Office had initially denied the building manager’s request to demolish the building and requested that the manager strengthen the foundations in the basement level before demolition work starts.

“When the manager resubmitted the request to demolish the building, the district office judged that the conditions were still unsafe and told the manager to take specific safety measures before beginning demolition work,” Ha said. “We have yet to tell if the manager followed these instructions.”

Four construction workers were at the site when the building collapsed, but none of them were said to have been injured.

One of the workers questioned, a 49-year-old man, came back to the site around 9:20 p.m. on Thursday after being questioned by the police, but he fainted and was hospitalized.

“We heard it was stress-related,” one of the workers told the JoongAng Ilbo.

Two construction workers came to Lee’s funeral, which was held in Soon Chun Hyang University Hospital in central Seoul, and conveyed their apologies to Lee’s father while on their knees on Thursday.

“They were to be married! In what manner could you conduct the construction so as to bring about this disaster!” Lee’s father shouted at the workers, according to Yonhap News Agency. “We need to find out what went wrong and who is responsible.”

The city government of Seoul said it will also check on the state of 14 other buildings being demolished throughout Seocho District.

“We will be checking them immediately to find out if the demolition work is being carried out safely,” Ha said.