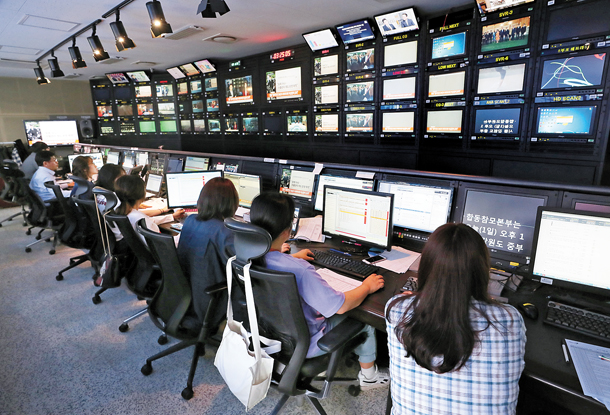 Employees work in a control room at a broadcasting company in Seoul. Starting July 1, businesses with more than 300 workers that had been previously exempted from the 52-hour workweek including bus drivers, broadcasting, finance and university workers, are now also subject to the law. [YONHAP]

One year since the country’s implementation of the 52-hour workweek, businesses and workers are still struggling to adjust to the work environment created by the shorter working hours.

An assistant manager surnamed Kim who works in an IT department at a local financial company expressed worries about his workload recently after his company started to follow the shorter workweek hours at the beginning of this month.

Prior to the rule, Kim’s department had worked overtime and even over the weekends for a year to revamp the company’s IT system by October 2018. That kind of work schedule is now impossible. The finance sector, previously exempted from the shorter workweek rules for a year, began to follow the 52-hour workweek regulation on July 1.

“Starting early this year, a computer shutdown system has been introduced that turns off computers after work hours, however if an emergency happens, we don’t know how to respond,” said Kim. “Unlike the manufacturing sector, we manage the finances of our customers, so it is all the more worrisome.”

The government introduced the 52-hour workweek on July 1 last year for companies with more than 300 employees. Starting this month, 21 categories of business that were previously exempt, including finance and bus transportation, have to abide by the rule.

Although businesses have called for complementary legislation to ease the transition, a total of 15 related bills have yet to pass the National Assembly. 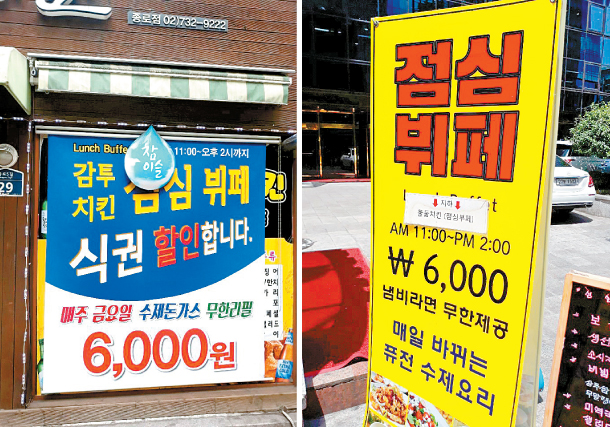 They argue that the maximum period for flexible working hours, in which daily work hours can exceed the maximum limit as long as the entire period averages to the weekly limit, should be extended from the current two-week period. Business lobby group Korea Economic Research Institute has suggested that shipbuilding and petrochemical companies be approved for extended work hours during certain periods because keeping the workweek limit is realistically impossible.

A refining company faced losses after implementing a new work schedule during an inspection of its production facility in the first quarter. It was the first routine maintenance since the adoption of the 52-hour workweek, so it opted to expedite the workload through more workers. The inspection, however, took much longer than expected.

Workers simply could not work for more than 52 hours a week, so workflow continuity suffered. Workers can work overtime for a week on the condition that the company receives permission from the Minister of Employment and Labor and the worker’s consent. Currently, these approvals can only be received during instances of disaster.

“Regular maintenance occurs every one to three years and is conducted for around three months after shutting down the factory,” said a manager surnamed Kim in charge of the labor department at the company. “The longer the maintenance takes, the greater the loss.”

Out in the field, workers are using all sorts of measures to keep up with the rule.

A researcher surnamed Lee who works at a semiconductor company admitted that he has to frequently record his working hours falsely to follow the shorter workweek hours.

“Although I worked with the computer on, I record that I drank tea, or smoked a cigarette. These kinds of situations have increased.”

Considering the current situation, calls to increase the maximum period for flexible working hours have grown.

The current maximum period is two weeks, which can increase to three months if an agreement between management and labor is made. Some businesses are calling for the period to increase to one year.

Additionally, many workers want to extend the current one-month period for selective working hours, in which workers are able to choose their working hours as long as the weekly average does not exceed the 40-hour limit.

Industrial sites are especially in need for the system as the workload is hard to predict.

“We need to escape from the uniform and regulatory working policies in the [new] industrial era,” said Choo Kwang-ho, head of the job strategy division at the Korea Economic Research Institute.

Office workers and the manufacturing sector are not the only ones impacted by the shorter workweek hours.

The rule has also changed the restaurant scene, as establishments that previously only catered to late-night drinkers in commercial areas try to attract office workers by offering cheap lunch buffets.

Around Gwanghwamun in central Seoul, it is easy to spot buffets that offer lunch for 6,000 won ($5.12). This is not due to a sudden boom of buffet restaurants.

As workers leave work earlier due to the 52-hour workweek, the signature late-night snacks for office workers such as chicken and beer are less in demand. Pubs and bars now offer lunchtime buffets to make up for business.

Another factor is the struggling economy, in which customers look for a meal at an affordable price. If paid with cash, some buffets only receive 5,500 won for lunch.

At 1 p.m. on July 3, near the Gran Seoul building in central Seoul that hosts a number of famous restaurants, workers stood in groups after finishing lunch at a bar that provides a 6,000 won-buffet.

“The sausage and rice soup from a nearby restaurant costs 7,000 won to 8,000 won and black-bean-sauce noodles are also 7,000 won, so this place is the best in terms of price,” said a worker surnamed Lee.

Another worker surnamed Park added that the place is not crowded when visiting a little later than lunch time, so it is comfortable to have meal alone without having to worry about others.

The Jongno branch of the Oktoberfest bar introduced lunch buffets for the first time three years ago. According to an employee, around 500 customers come for lunch each day.

The trend has expanded to adjacent offices. Fried chicken franchises now see between 100 to 150 people visit during lunch. It means that a total of 1,000 workers in Gwanghwamun have lunch at restaurants that specialize in chicken and beer each day. The lunch menu is usually Korean food, which costs between 5,500 won and 6,500 won.

In June, the owner of Oktoberfest even leased a fried chicken restaurant next to the Four Seasons Hotel in central Seoul during lunch hours for a buffet business.

“The menu is Korean food so the ingredient expenses account for half of the sales,” said Kang, who operates a lunch buffet at a fried chicken restaurant.

Until last year, business was good, but since the 52-hour workweek kicked off, sales have sharply dropped.

“I expected it would be hard, but not to this extent,” said Kang.

“The minimum wage hike could be solved by employing less part-time workers, but I cannot do anything about customers not coming to our restaurant. Six years ago, when smoking was banned in pubs, our sales were slashed in half temporarily, and right now we are experiencing that again.”

He added that lunch service is followed by dinner service, and by the times he closes down the store, it is 1 a.m.

“For workers, it might have become a life with a leisurely evening, but for businesses that cater in the evening, there’s barely any profit.”

“Due to the minimum wage hike, the 52-hour workweek, as well as increases to soju and beer prices, it has become so difficult to be in the food service industry,” said Jegal Chang-kyun, the president of the Korea Food Service Industry Association.